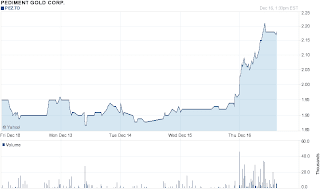 Here’s what subscribers read some 15 minutes before the opening bell this morning.

Pediment Gold (PEZ.to) had news out a couple of minutes ago. Here’s the link:

Let’s be brief and to the point: This paragraph from the NR means that PEZ.to goes up today.

“Based on the information received to date, the parties understand that the legislation, as originally proposed, has not been approved by the Governor and the Governor has stated publicly that it will not be approved in its current form. The current sitting of the BCS legislature has now ended. The legislature is not expected to resume sitting until March 2011, at which time new members and a new Governor will be sworn in following elections. There can be no certainty with respect to future legislative action, however, Pediment and Argonaut have held meetings with a variety of local stakeholders and legislators and believe there is broad opposition to the proposed legislation and support for the San Antonio Project.”

Your author owns a few PEZ for this eventuality and will add if given the chance to buy at $2.00 or under this morning.

As it happens my personal bid at $2.00 maximum didn’t fill because PEZ opened at 2.03 and didn’t look back, but no worries because it would have been an addition and the stock held is a win. The other thing is that The IKN Weekly isn’t really a intraday picking service, but more about investments over a longer timescale, so things like today’s Flash update aren’t so common. Anyway, PEZ is now up 10.7% on strong volume, those in early made their turkeymoney. Ho Ho Ho, merry daytrading girls and boys.