Peru and Shining Path: The gov’t gets one right at last 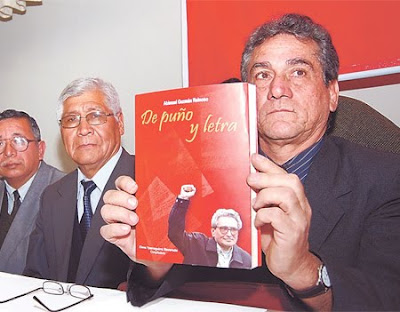 A portrait of shits
So far, the stealthy return of the Shining Path (Sendero Luminoso) terrorists to some sort of minor irritant power in Peru has been badly dealt with by the Twobreakfasts administration. The policies enacted have done nothing to hinder the movement’s control of the key VRAE coca producing region (if you don’t believe me check recent cocaine numbers for the country) and the “we’re gonna stop ’em” talk from Twobreakfasts himself, from the defence ministry and the interior ministry has been all talk and no action.
But this weekend they actually did something worthy of praise. Late last week Alfredo Crespo, the lawyer for imprisoned Sendero leader Abimael Guzmán, held a press conference to announce the publication of Guzman’s new book/biography/ridiculous apologist rant. It was a full-on presser and got people (example Rendon over at GranCombo) wondering how the devil this scum can peddle a book like this in open defiance to the country. Well late last night Peru’s ministry of justice announced it would be seeking charges against the lawyer for “apology to terrorism“.
QUITE RIGHT TOO

The world and especially Peru doesn’t need these scumballs getting the merest ounce of publicity for anything they do. There are times when freedom of speech should be suspended and those trying to peddle filth disguised as debate thrown into jail and there are times when a government should (even must) lay down a line of authority and say, “No, sorry, you cannot do what the F you want in the name of this or the name of that…not on our watch“. So well done and applause to the justice ministry of Peru and down with all Sendero sympathy once and for all. Jailtime for Crespo, please. Lots of it.

UPDATE: The following was left in the comments section by reader ‘mr’. Absolutely right, mr, and the situation he recounts was repeated by these überscum all over the country.

In Oct. 1991 I was in Mazamari the day after SL had carried out a major attack in San Martin de Pangoa. 200+. One of the things done in that attack was the ritual killing of an eleven year-old boy, called ‘bautizo’. No amount of ink and paper can ever cover up the atrocious MO of those individuals. Another disgusting tactic employed around Lima to gain access to high tension towers which had been mined was to pay children to climb through the barbed wire and cross the area. Very ugly. SL did not want to gain control of Peru as such, their objectives were doing exactly what they did. If they really wanted to control the country their MO would have been entirely different. Scumbags is light-handed, Otto.