Peru: as corrupt as ever 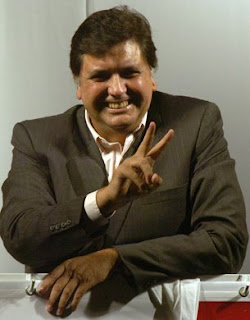 “Just the one breakfast this morning, Mr. García? Or would you like two”
Another immersion in the putrid world of Peruvian politics.

Remember the scandal back in October when this Romulo Leon guy was recorded in conversation with Alberto Quimper of state-run PetroPeru talking about the bribes they were about to pick up for favours offered to foreign oil companies? Yeah, course you do cos I blogged about 9 times on the thing (here’s one). It’s also the corruption scandal that led to the resignation of the then Prime Minister Jorge Del Castillo and all the cabinet and the start of the woefully disappointing Yehude Simon’s term.

So anyway, since then plenty has happened in the case, but things came to a head this week with two happenings.

The parliamentary commission charged in investigating as to how deep all this corruption malarkey went (and it went deep into the APRA party, no doubts) was expected to slap at least four ex ministers with formal corruption charges. But when it came to the vote, one committee member decided to vote against the charges and due to the nature of the committee this meant that the charges disappeared into puff of smoke. Carlos Raffo is the name of the committee dude that saved the bacon of Jorge del Castillo along with ex-Health Minister Hernan Garrido, ex-Health Minister Carlos Vallejos and ex-Mining Minister Juan Valdivia

Of course Raffo will deny it (in fact he already has), but people who don’t live in the fantasy world of PeruPolitik need about 10% of their brainpower to work out that he was bribed by the APRA party to change his vote. This Raffo guy is one of those long-standing “controversial ministers”; a member of Fujimori’s party, a vocal supporter of his ex-boss..and most importantly a corrupt piece of shit who would sell his mother to a platoon of Slavic soldiers given the chance.

Meanwhile, in true Peru style, while the guilty corrupt bigwigs get off scot-free the people who managed to eavesdrop the conversation between Leon and Quimper in the first place are now behind bars. Eight people from the Peruvian Spooks’Я’Us company “Business Track” (website here) were arrested yesterday, including the bossman who was………roll on the drums…..the ex chief of intelligence in the 1990’s Fujimori government.

And thus the sordid world of Peru, APRA and Twobreakfasts continues:

And President Twobreakfasts, leader of the most corrupt political party in South America, member since he was old enough to walk, stalwart party capo-de-tutti-capi for decades….. knows absolutely nothing at all.