Your humble scribe noticed over the weekend the Peru CPI rate for August (well, to be exact it’s the consumer price index for the Lima & Callao conurbation rather than Peru as a whole, but that’s been the local benchmark for inflation since the year dot and will remain that way for sure) came in at 0.51%, which was higher than expected. The inflation spike-ette was mainly driven by food price increases and that’s never popular for elected governments, as it’s the type of inflation that eats into the pockets of the lower strata more than those with excess cash to spend on the fripperies of life.
The 0.51% hike needs a bit of context though, so we’ll start with this chart that shows the inflation rate since all that world crisis stuff happened in late ’08 (we start the clock at Jan 2009, it’s good enough).

We see that inflation has dropped from above 6%, then climbed back to nearly 5% by late 2011, but this year has been tracking back towards the Central Bank target of 3% max (Peru uses an inflation targetting policy and the current band is set at between 1% and 3%, for what it’s worth). That’s a good thing of course and when it’s combined with the type of growth numbers we’ve seen in Peru recently it implies more spending power to the average Peru pocket. So with relatively tame inflation and GDP growth, your humble scribe’s thoughts immediately turned to the forex rate between the US Dollar (USD) and the Peruvian Nuevo Sol (PEN). Here’s a five year chart ripped from Yahoo that shows… 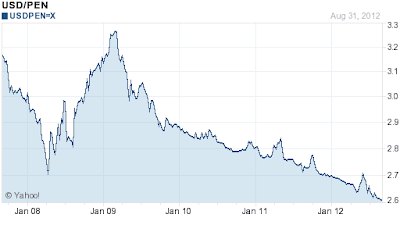 …an ever-strengthening local currency, now at 2.60 to the greenback and roughly 20% better off than at the start of 2009. “Hmmm...”, thought your humble scribe, “betcha that’s keeping down inflation on imported goods that these newly wealthy Peru dudettes and dudes suddenly want to buy because it’s all fashionable and cool to have foreign designer branded goods in the house because they tell me that on the TV and the people on TV never lie to me or have ulterior motives, do they?“. And so it was back to the Peru Central Bank (BCRP) website to check and sure enough…

…the underlying rate of inflation looks like it’s being kept in check by cheaper imported goods in Nuevo Sol terms, because a stronger Sol means dollar-bought goods are cheaper for locals to buy. That’s fine, but what we need to ensure now is that the Nuevo Sol keeps up its good work against the dollar because now Peruvians have developed a taste for those snazzy foreign goods and services, if the Sol puts in a significant drop against the dollar, dollar-priced imports (basically all of them) will get more expensive and drive up that inflation rate…and governments don’t like higher inflation rates. But fear ye not, help is at hand thanks to the BCRP’s policy of aggressive adding to the country’s international currency reserve.

Peru’s currency reserves have basically doubled since 2009 and now stand just a tiny tad under U$60Bn (that’s $2k for every man women and child in Peru). What that means is the currency has increased backing from the world’s reserve currency (and like it or not my shiny goldbug friends, the dollar is the way the world saves its money, period). Which means the Sol isn’t going anywhere as long as the Peru GDP growth keeps clicking on. Which means the currency will remain strong relative to the dollar and hold back the spectre of imported inflation. Which just reminds me once again how much of a total dumbass Steve Saville looks when he tries and fails to talk about basic economic realities.