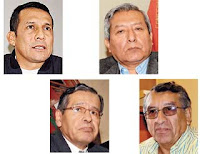 Four of the witch hunt targets
Catchy name, no? The mass arrest in question hasn’t happened (yet?) because the relevant documents were leaked to Peruvian daily “La Primera” last week. Basically, the Peruvian D.A. department in charge of terrorism affairs (acronym DIRCOTE) has officially requested the arrest of 14 prominent opposition politicians and unions representatives, including de-facto leader of the left wing Ollanta Humala (the guy who lost to Twobreakfasts in the last Presidential run-off).

The plot (there’s really no other word) to scoop up all the hardline García opposition and throw ’em in jail was discovered and denounced last week by La Primera (with photocopies of the arrest petitions and everything), but while the APEC summit was on the García administration stonewalled all enquiries. Now that world dignitaries have gone back home, the gov’t has admitted the ongoing investigations into these opposition leaders, all justified by the very sinister sentence of Interior Minister Remigio Hernani:

“There is an investigation related to international terrorism.”

Why creepy?
1) It’s the 21st century catch-all accusation.
2) If the investigation is international, then other bodies are already involved. CIA? You betcha.
3) According to the ongoing investigations of La Primera (doing a fine job, by the way), the whole invstigation is related to the (in)famous FARC laptop.

Personally I don’t like any of the politicos named on the DIRCOTE list. Not one of them. But there’s no way…repeat NO WAY they have anything to do with some sort of pan-Latino terrorism plot. You’re not automatically a member of Al Q’aeda just because you’re a jerk. But the atmosphere in Peru is becoming evermore oppressive to anyone who dares stand up to the authoritarianism of Alan García. All this does not augur well for a calm future in Peru.