Peru knows what the world wants: A Birdshit Museum 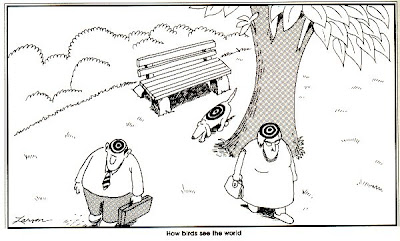 A good excuse for a bit of classic Gary Larson
According to Peru’s ‘El Comercio’ today, the Lima regional government is planning to build a museum in the Isla don Martín/Veguera part of the region to celebrate the role of guano in the development of the country.

The Isla Don Martín is very pretty at sundown
Here are a few fun factoids on guano, as collected from Google by IKN in the last 20 minutes:

Illustration of 19th C. guano workings in Peru
Today’s project announcement to create the birdshit…sorry…the Guano Museum was attended by all the necessary local bigwigs. The plan is to (and I quote) “appreciate the historic, milenary and contemporary value of guano to the national economy with the use of science and technology in its extraction.”

One of the bigwigs was quoted in El Comercio as saying, “This is a great opportunity to complement the desired development of tourism in Vegueta, a district that has everything needed to develop a productive and touristic zone.” And that’s because it has a lot of birdshit.

Ok, I’m being a teensy weensy bit flippant here, because there’s a lot of interesting history behind this story. Try clicking on this link for a short history of Peru’s guano trade (it’s in English) and you’ll find it interesting enough I’m sure (I did). But whichever way you cut it, I don’t think the Guggenheim is going to worry too much about its 2009 customer base being drawn away by Lima’s birdshit museum. Cos that’s what it is. Birdshit.