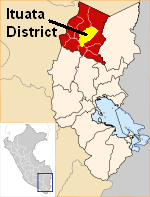 Remember back in March when the Winchumayo gold mine in the Ituata district of Puno, Peru suffered a landslide and multiple deaths ensued? Well, we wrote about it at IKN in this post right here if memory isn’t serving so well.

So today this story is hitting the wires in Peru, all about how the government SUNAT tax office is launching a big campaign to get back taxes paid by those that have dragged their feet at the moment of paying their dues to society. Chief among debtors is a mining company called “Media Naranja” that owes the state a cool two hundred and twenty-three million, eight hundred and seventy-nine thousand, four hundred and fifty-four Nuevos Soles…and 40 cents. To give context, at today’s exchange rate that’s U$76.93m in greenbacks. A lot of cash.

So what’s the connection between paragraph one and paragraph two? Well, Winchumayo is owned by three entities who then rent out its operation to the hundreds (even thousands) of artisanal miners who work the seams and get the gold. The typical system in the Andean Amazon basin region where Winchumayo is located is to get the miners to work five days for the owners, then on the 6th day anything they produce they keep (other areas use different ratios of days). Here are the three owners:

In other words, a private miner and two politicians have been making their millions via the ethically dubious, clearly dangerous and almost totally unregulated world of the South American artisanal miner. But the interesting one is Alfredo Tomás Cenzano Sierralta, and for two reasons:

And that’s how the APRA party works in Peru, folks. You often see me mention the stinking corruption of the APRA party, but it’s not so often that an open-and-shut case of its disgusting modus operandi comes to light. An APRA congressman abusing workforce and environment to get rich on unregulated gold production that doesn’t pay his taxes to multimillion dollar levels. 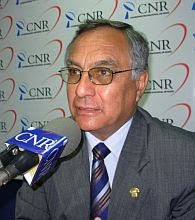 Alfredo Tomás Cenzano Sierralta (for it is he)
These are the people running Peru in 2009. No wonder people think it’s investor-friendly.
Viva investment grade. Viva, viva, viva.