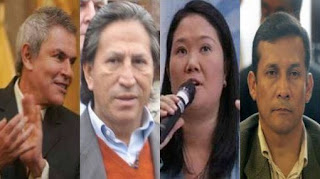 the rogue’s gallery of top 4

Today’s survey from decently reputed pollster CPI was at a national level too, not the Lima/Callao survey mentioned a couple of days ago. Data (and photo, in fact) from here:

Luis Castañeda leads but the gap is closing. Toledo is confirmed in second place and the loser is once again Keiko Fujimori (ThankDaLawd). It’s a long way back to 4th place at the moment.
People, there’s still a long way to go in this campaign and anything might happen so we shouldn’t read too much into things as they stand….perhaps around mid-February onwards is when poll readings can be taken as a decent reflection of what might happen come election day. But  today we can confirm that Toledo is now a serious candidate to get his old job back and by the looks of things, no single candidate will win 50%+1 vote in the first round so a 2nd round runoff between the top two is a virtual certainty…whoever they might turn out to be.