The last month has seen a whole batch of polls from various companies and, barring a couple of dubious pollsters with long histories of favouristism (eg IDICE that hearts APRA) the numbers churned out have been (not exactly but fairly) regular. Today we get one from ok pollster IMASEN that goes like this:

As it was commissioned by Peruvian national newspaper La Republica, here’s the screenshot of what appeared there this morning, too. Nice breakdown of provincial support for each candidate that shows the strong and weak points of each. 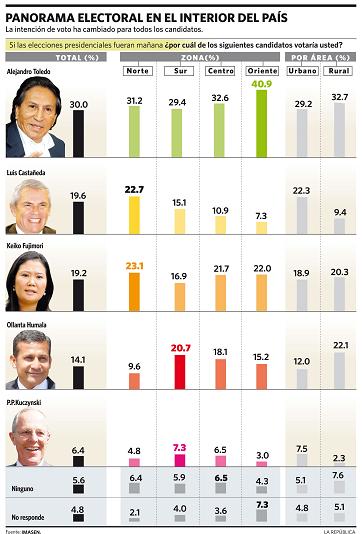 So now a view or two from your humble scribe:
1) Barring a very very big upset, Toledo will make it into the two-person second round runoff (and equally large a surprise would be his garnering enough votes to win in the first round…50% +1 vote isn’t in the cards).
2) It’s still tight between Keiko Fujimori and Luis Castañeda for the other spot in the run-off. Keiko has had a hardcore of 19% to 22% of the vote for a long time now and it hasn’t changed. Meanwhile, Castañeda has been steadily losing voter support (in the polls at least) for the last six months or so. It’s his second place to win or lose, with Keiko setting a benchmark.
3) Ollanta Humala has recently moved up from a generalized 10%/12% in various polls to a generalized 13% or 14% now. He’s running a good campaign, keeping his more hardcore nationalists/leftist views out of the debate and has connected very well with rank and file Peruvians during his street campaigning (perhaps on an equal footing with Toledo on that score). If there’s going to be a surprise in this election, Humala is the likely cause and if he gets more momentum it’d be possible (i’d call it unlikely but possible) that he snatched the 2nd place runoff spot.
4) Whatever happens and whoever he’s up against in the run-off, be clear that Toledo is now odds-on favourite to be the next President of Peru. His campaign is well-organized and slick, he’s a good politico and most importantly the feeling from Peru is that many will vote for him as “the least worst” rather than a great option, simply because the others on offer are so mediocre. Ollanta has baggage from the 2006 campaign, Keiko is quite simply the daughter of Alberto and that in its itself is enough to put people off her, Luis Castañeda is about as charismatic as a wet lettuce and this has been shining clear in the campaign so far, putting people off his candidacy.
5) It’s been funny to watch the PPK campaign. He gets a lot of airtime and media support (because he’s right up the street of the media moguls and newspaper owners) but when push comes to shove he has little support on a grassroots level. It’s refreshing to see that the media can’t always bend public opinion to their collective will.
The bottom line is that IKN says Toledo gets to be President of Peru once again after a the run-off. Put a gun to my head and I’d say that he faces Keiko in that run-off, but it’s really way too tight for second place between two (perhaps three) names. By the way, let’s also be clear that Toledo has been the IKN tip since March 2010 when he was polling just 8.2% and stuck down in 4th place.
dyodd