Peru to Venezuelan criminals “Come on over, you’re all welcome (bring cash)” 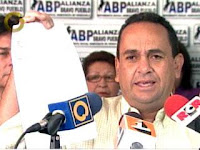 Perez. Boo hiss we don’t like you
This week a certain Oscar Pérez Torres arrived in Peru from Venezuela seeking political asylum. His arrival comes on the back of other recent Venezuelan opposition runaways such as the ex-governor of Aragua state Didalco Bolívar, the Maracaibo dude Manuel Rosales.

Oscar Pérez, a well-known political figure in Venezuela, calls himself the principal advisor to Caracas mayor Antonio Ledezma. However he’s also a thug and if Peru grant asylum to this scumball it would have uppd the ante in its “we accept anyone with money who claims persecution in Chavezlandia” policy of late. Guys like Rosales have a patchy record and have very likely been up to neck in corrupt activity for quite a while. But that’s hardly anything new in LatAm politics, so the timing of his call to courtroom does smack of political witch-hunting, at least to a certain level. Personally I think Rosales desreves plenty of time behind bars, but Vzla oppos will at least debate the dude’s circumstances with an opinion that cannot be thrown away in seconds.

No so Pérez. The guy is nasty. He’s the leader of a crime syndicate in Caracas that has dealt in stolen cars. He’s the guy behind the recent violent behaviour of opposition marchers (who tend to make noise but not much else when scumballs such as Pérez are involved). He has an arrest warrant out on him because he’s broken the freakin’ law! That’s all. This isn’t politics, this is delinquency and the will to pass bribes to government figures in the name of freedom.

If Peru takes this guy in, its moral capital will go directly to zero. A bellweather case well worth following.