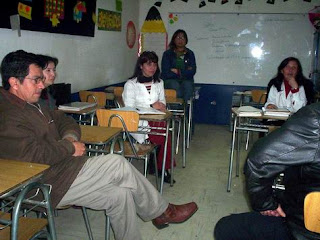 The Alba house in Puno during one of its well-supported adult literacy classes
In a decision that will shock absolutely nobody, the Peruvian governmental commission set up to investigate the so called Casas de Alba funded by Venezuela (mainly) on its soil has concluded and decided that the organization is interfering in Peru’s political affairs. The commission has therefore recommended that all 31 Alba houses found in Peru (mainly in the very poor high plains and jungle regions) should be closed down. This decision was for Peruvian politikwatchers along the lines of predicting whether bears relieve themselves in areas of dense forestry.

President Twobreakfasts plans to replace the community buildings and drop-in social centres with flocks of communal sheep along with a fraternal message to “get back to what you were doing before, peasants”. The subsidized and free lunches given to the poor will be substituted by a cheese sandwich. Adult literacy classes will be replaced by a Nintendo Wii.

UPDATE PM: El Universo in English has a short report on the story.