Peru’s Central Bank moves from attack to defence of its currency: Here’s why 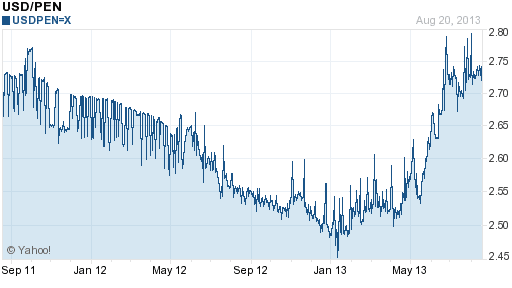 The news today that Peru’s Central Bank, the BCRP, sold three hundred and fifty million dollars into the local forex markets in order to stop the national currency, the Peru Nuevo Sol (PEN), from depreciating any further was interesting, because it’s the single biggest selling intervention that Julio Velarde & Co have ever made. The above is the two year chart for the Sol (PEN) against the greenback and here below is a chart that records all CenBank interventions since January 1st 2012 (could have gone back further but the chart gets messy to read, if you want more raw data on this go here):

In short, we’ve moved from years when the BCRP would buy dollars and suck them out of the market in Peru in order to stop the PEN from getting stronger (and ruining things like exports in those Nuevos Soles) to the recent scenario when the BCRP wants the Sol to maintain at its 2.80 to the dollar, not drop any further and not cause monetary inflation to begin hitting imports (because these days, Peru has grown rather partial to those cool developed world gadgets and things). That’s the problem when you start running trade deficits, you see. And that’s what Peru has hit its head on this year, what with its trade balance suddenly hitting red bars regularly (betcha a tenspot that July and August come in negative, too):

And that’s because copper and gold, the monocultural exports of Peru, have been whacked for price at market. Which is why mining matters to Peru. A lot.