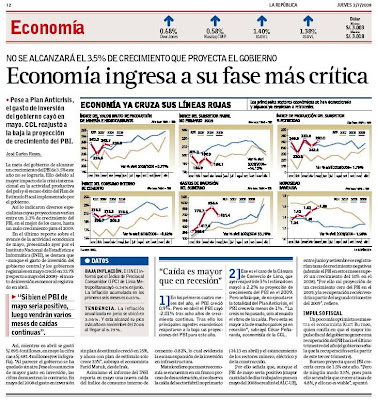 Click to enlarge
On March 17th, your humble correspondent called Peru’s GDP for 2009 at 2.25% (as part of a friendly wager, see here). Right up to today the delusions of 3.5% growth this year persist at the Economy Ministry (FinMin Liar Carranza) and the Central Bank (slightly better Velarde, but still in a dream world).

However an important article in today’s La Republica (screenshot above, link right here) makes is plain as day why these official forecasts are simply wrong. The economy is getting trashed, growth would have to average 4.8% for every month until December to make the gov’t prediction, cement dispaches fell again last month, public works investment has ground to a virtual halt, prices are being cut left, right and centre as those affected push on their own strings, but this most awful of governments insists on its siren song of “everything’s good…don’t worry…think positively…we’re doing just fine…investment grade, y’know….”

I was asked last week by a man who watches all things Peru economy closely just why I’m so harsh on the Peruvian situation. It’s not because they’re going through some kind of Russian recession (-11% right now, they tell me), it’s because the country is so totally unprepared for what’s about to happen. Before 2009, Chile was telling its people “look..we’re about to hit a rough patch…get ready, people” but at the same time Twobreakfasts was ranting about how the Peruvian economy was armour plated against the world financial crisis, even though the economies of Peru and Chile are very similar. Amazingly, this ostrich-like attitude hasn’t changed a jot in the ensuing 6 months. Peru is still unprepared for the shit that only now has begun to hit the fan. My problem with Peru isn’t the comparative macro numbers, my problem is the vast, arrogant stupidity of its leaders that can’t break the habit of lying to their people. How many more times must I read “ya hemos tocado fondo?”. Dumbasses all.