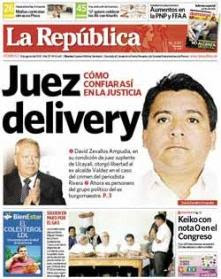 Y’know I thought I wouldn’t be revisiting this subject after last week’s post that pointed to not one but three cases of corruption between the drug barons of Peru and the judiciary in their sordid pockets, but here we are again. The reason is this story that’s almost too brazen and bizarre to be believed.

Today Peru’s national daily ‘La Republica’ broke a story about our old pal Luis Valdez, the narco capo of the Ucayali Amazon basin region of Peru, the very same Luis Valdez that has been featured on several occasions here at IKN because he’s knee deep in the cocaine trade, he ordered the killing of an investigative journalist and then recently got let off the charges by a compliant judge in highly dubious circumstances.

Today’s story tells of the judge that, back in late 2005, originally ruled that Valdez should be liberated from the charges murder and ordering the assassintion of the journalist Alberto Rivera. thus Valdez was set free and, quite literally, got away with murder. The now ex-judge’s name is David Zevallos and he has now turned up in the public spotlight again because…wait for it…he’s now the president of the electoral committee of the Ucayali political party “Todo por Ucayali“, whose leader is none other than Luis Valdez!

In other words, not only has Valdez been let off the charges and let out of jail again, he’s also going to run for public office in his region again, but to cap it all the compliant judge that absolved him of charges in 2005 is now his political campaign manager!

But of course the cocaine problem is all Hugo Chávez’s fault, right?