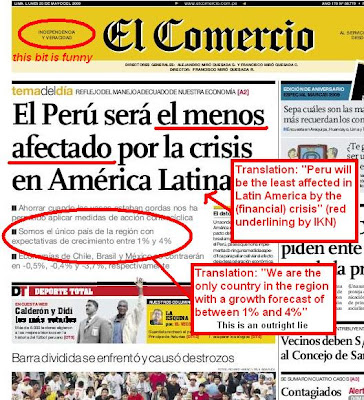 Here’s the front page of Peru’s El Comercio today. From the state of the message from Peru’s most serious government mouthpiece we can see how Twobreakfasts is going to handle his loss of face in the weeks and months to come:

1) Via comparative spin. The tune is now changing from “we’re doing great!” to “we’re doing less badly than the others“. The rhetorical climbdown of the charlatans running Peru has been fun to watch recently. Remember that it was just a few scant weeks ago that FinMin and liar Luis Carranza was on record as saying Peru’s GDP would grow by 5% in 2009. Last week Spain’s BBVA bank downgraded to 2.2%, by the way.

2) Via outright lies. The claim that Peru is the only LatAm country set to grow more than 1% is just plain false, as Bolivia forecasts its growth at +4% for 2009 and even the stodgy old IMF (who finds it very tough to say a good word about any lefty gov’t) admits Bolivia will grow by +2.2% this year. Then add a Brazil that’s getting decent forecasts thrown its way for the third and fourth quarters, and other more contested forecasts such as Venezuela that’s now picking up thanks to the rebound in oil prices and Argentina thanks mainly to the soybean.

The façade of lies is now falling apart. Even Joe Public on the streets of Lima is starting to ask how Twobreakfasts can note 200,000 layoffs due to the crisis and growth for the country. As this government has staked the whole pile on economic policies, claiming that trickledown will help the deep social problems of Peru, once the house of cards falls apart the moral and political capital of Twobreakfasts will be at zero. The scenario coming to a neoliberal government near you soon, folks.