This map (click to enlarge, but it gets big) shows the place on the roads of San Martin Department, norther Peru, where indigenous protestors have been blocking three sections of highway for the last 20 days. 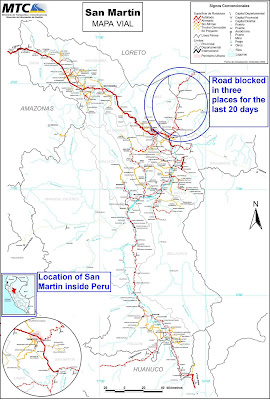 Suddenly, according the reports, some 600 police officers have turned up at on the scene and “asked” the blockaders for a temporary respite in their protest to allow the tailbacks of trucks to get through. It seems this temporary deal has been agreed upon by locals, but the police have said that they will try to stop the protests from restarting “in the next 24 to 48 hours“.

Seemingly, Twobreakfasts isn’t happy with the blood of 50 dead people on his hands and is going for more. Does he seriously think that he’s going to attract foreign investment to the area by cracking open the heads of the people oil companies must be friendly with once exploration starts? Pass me the crazy pills……..