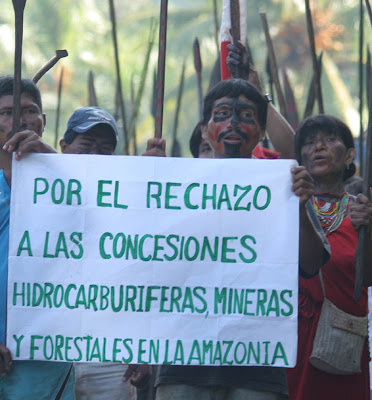 Today’s Spanish lesson: Rechazo = Rejection
(further translation, if needed, available on request)
Unsurprisingly, the world didn’t suddenly go Pachakuti on us with the Twobreakfasts mea culpa on Wednesday evening. Just when you think the government of Peru might have learned something about its own people (e.g. can’t treat them like slaves any more, can’t rob them blind like they could 30 years ago, can’t feed them BS propaganda in 21st century) we get the Peruvian Ambassador to the USA coming up with a revisionist history of the Amazonian conflict. And before we look at the crap presented as facts yesterday, it’s worth noting that the Peru-US wig right now is none other that failed FinMin Luis Valdivieso, a man who has lived in every other part of the world except Peru for his whole adult life, except for the reent 10 month stint when he was called back to play at FinMin and was about as effective as a chocolate fireguard. Honestly, if you’ve walked the Inca Trail you’ll know more about the issues in question than that guy, birth certificate ‘made in Peru’ or not.

So on to yesterday’s presentation, which you can download and enjoy for yourself (gotta like reading fiction, though) right here. If you move to the paydirt page (slide 26 of 29), you’ll read the following (in bold). A few Ottocomments come in between:

We acknowledge that the DL 1090 was not consulted with the principals of the native communities because it was believed that it was not against but in favor of them.

Oh those silly brown people! They just couldn’t see that we’re only trying to help them! Somehow they managed to misconstrue that by taking away their rights of consultation and approval on any project earmarked for their region they would be in a stronger position, not a weaker one! They didn’t realize that by refusing to grant land ownership to the peoples, towns and communites that had applied for and done all the necessary paperwork years and years ago, and then claiming that land as “common ground” and selling it in underhand deals to oil companies, that this isn’t like all the other times they’d been robbed of their natural resources in the last 500 years, this time really is different, folks…………….

It is now clear that the interlocutors for the dialogue were not representative and had a hidden political agenda not consistent with the concerns of the native communities.

WTF? There is no “hidden agenda”. From the very moment the presidential decree was pushed through under emergency laws (that came to be simply to appease the US FTA) the indigenous communities affected by DL1090 protested. The protests started in July 2008 and only captured headlines when people got killed, but the protest was always representative of everyone in the region. This is total crap.

There was widespread and concerted misinformation and political interference both domestic (from the nationalist party) and external (particularly from President E. Morales and some ministers from Bolivia and Venezuela) who called for radical measures to destroy the Peruvian development model for the Amazon, to weaken the democracy, and ultimately to bring down the government

Hey guys, I got a great idea! When in trouble, blame Hugo and say it’s all Evo’s fault. What they saying here, that Evo has more influence over Peruvian affairs than its own President? That in itself is telling testimony of the changes going on in South America, but the fact is that neither Bolivia nor Venezuela interfered in the protests. No financial aid, no food handouts, no nothing. Of course both Venezuela and Bolivia made supportive noises about the Amazonia protest, but then again so did Belgium. And Norway. And Chile, for that matter. But let’s not confuse things, eh? Just blame the axis of Evo for all your troubles and retreat into paranoia.

There was also a miscalculation in believing that there were only natives protesting and not criminal elements ready to create chaos and ignite an armed confrontation.

Incredible. “And we would have gotten away with it too, if it weren’t for you pesky kids and that dog.” Y’see, because WE decide that the protest is illegal and the la (which is now illegal in itself) was just, anyone opposing that must be A CRIMINAL! And we just didnt think the brown people would kick up a fuss…..goddam cottonpickin’ miscalculations.