Peruvian Journalists Reporting on the Amazon Conflict Threatened by Authorities 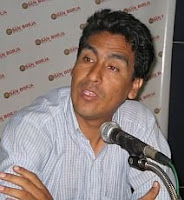 Geovani Acate (for it is he)
You want government threatening reporters to shut up or “have problems”? You want state control of media? Forget the rest, Peru is still the best. A direct translation of the first part of this report in Peru’s CNR

Reports of Continued Threats Against Journalists in Amazonia

Yurimaguas-Loreto, 09/06/2009 (CNR): Despite the partial re-establishment of calm in the Amazonian conflict zone, reporters from diverse media are receiving threats to stop them from filing reports at a national level, the director of Radio TV Oriente, Geovani Acate, denounced today.

He explained that on his return to the city of Tarapoto in San Martin, he met with TV reporters who told him they had received telephone calls demanding that they stop informing about the Amazon protest.

“For example, the case of Jerry Izquierdo, cameraman at TV Oriente, who even had people going to his house who talked with his wife. They warned her he should stop sending reports to media companies in Lima because they could have problems (later)“.

According to Acate, the authors of the threats are presumably police agents of the DIROES special operations unit.