Petaquilla Minerals and Reuters; what a pair, eh?

LA PINTADA, Panama, Nov 27 (Reuters) – Canada-based Petaquilla Minerals will start production at a new Panamanian gold mine in January, a senior official at the project said on Tuesday.

The project has been criticized by some anti-mining groups but Eysseric said the protests would not delay the start-up date.

The engineer said there was “no risk” of the mine opening behind schedule. (Reporting by Andrew Beatty; Editing by Christian Wiessner)

So why do I love this report so much? Well, I could dwell on that fact that the content is false and misleading. I could chortle a lot about that “no risk” quote. Or I could even talk about Andrew Beatty of Reuters who has a suspicious track record of pumping PTQ.to and is either lazy, incompetent or on the take (whatever way, he’s a poor excuse for a journo and Reuters should be ashamed).

But the REAL REASON to adore and worship this report is the filing date, Wednesday 28th November 2007. Yep, the “no risk January” mentioned in the report refers to January 2008! Here we are over a year later and the company is still lying and cheating its shareholders and the wider investment community. And while we’re at it, let’s have an example of PTQ.to deeds (for that is how thou shalt know them). Here’s a photo from 2005 of the Molejon site.

It was taken by Panama’s environmental people ANAM to show the illegal and non-permitted logging that was going on at the site. PTQ had cleared about one hectare of jungle without asking and ANAM slapped a $10,000 fine on the company. Cut to 2008, and here’s exactly the same area of jungle. 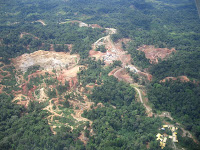 The company just kept on logging and clearing and now the exposed area is 20 to 30 times larger. Now does that look to you like a company that respects government authority and environmental rules and regulations, or does it look like a company that thinks it’s above the law? And to get into context the barefaced cheek of these shits, PTQ.to is currently looking for legal loopholes and appeals to avoid paying the $1.93m fine that ANAM slapped on the company due to its continued illegal, anti-environmental activities.

That anti-mining groups hate Petaquilla Minerals is clear. However the point here is that pro-mining people should also hate PTQ.to and call the company out for what it is. It’s companies like PTQ.to that give the whole industry a bad name and offer fuel to fire the illogical extremes of the anti-mining protest community. Not all miners are the same, and the majority that are socially and environmentally responsible should rise up, point their fingers at the PTQs of this world and run them out of town.

Petaquilla Minerals: Dissecting the press release of a rogue miner