Petaquilla Minerals: Dissecting the press release of a rogue miner 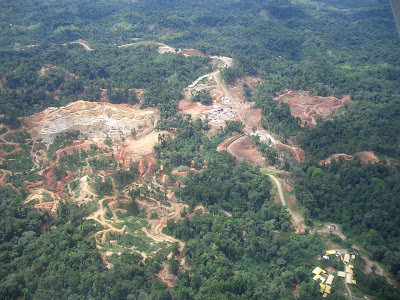 The Molejon Mess
A gold mine is a hole in the ground with a liar on top.
(Benjamin Disraeli, though often mistakenly attributed to Mark Twain)

Press releases are the lifeblood of junior, exploration-stage mining companies. With no meaningful production these companies rely on PRs to keep shareholders interested and wave a “hello! look at me!” to the rest of the investment community.

PRs from straight-shooting, upstanding companies with good reputations and honest management can be read quickly and, for the most part, be taken at face value due to the respect and trust earned previously. Off the top of my head, an example from a company I follow but don’t presently own is Chariot Resources (CHD.to) that only releases a PR when it has something to say and gives plenty of factual detail when it does say something.

However, there are also companies like Petaquilla Minerals (PTQ.to), a company with top management under charge of embezzlement in Panama and with a history of issuing PRs full of deception, doublespeak and lies wrapped in evase legalese to make them technical truths. When PTQ.to issues a press release it can only be taken at face value by people with more money than sense and must be examined closely, else you risk falling into the traps laid by its devious owners and believing something that may cost you dearly at a later date.

Here’s the link to PTQ.to’s latest offering and below I’ve pasted it out in full. However by way of an example I’ve also added my own comments in red between the lines of the PR in italics. So here we go with today’s episode of “Spot the PR bullshit”:

VANCOUVER, BRITISH COLUMBIA–(MARKET WIRE)–Jan 16, 2009 — Petaquilla Minerals Ltd. (the “Company”) announces that, further to the Company’s news release dated November 28, 2008, the Company has established a working group to collaborate closely with the Autoridad Nacional del Ambiente (“ANAM”), the environmental agency of the Government of the Republic of Panama.

The news release dated Nov 28 is the one I pulled apart on this link. It’s the one that PTQ.to used to imply that it had received its Environment permit and was commissioning its plant, with the first pour due in the latter half of December. Obvious BS as it’s now January and no pour was made, but for further reasons why the Nov 28 PR was a pack of lies check the previous post.

On November 26, 2008, ANAM issued a resolution (the “EIS Resolution”) approving the Company’s Environmental Impact Study Category III (the “EIS”). The EIS essentially brings up to World Bank standards the environmental impact study prepared by the Company and approved by the Panamanian environmental agencies in 1996.

No it doesn’t! The Cat 3 study is only one part of the full approval needed to start production. Also, 1996 regulations are a light year away from what is needed now; the 1996 approval may as well have been written on toilet paper and used by CEO Fifer for toilet paper’s intended purpose.

The EIS Resolution sets out a number of conditions to be satisfied before the Company can attain full commercial production of the Molejon Gold Mine, which forms a small part of the overall project area.

Here we have the first number fudgery. When PTQ.to says “a number of”, that actually means 45 requirements that have to be complied with before the EIS is approved. As for “a small part”, that’s a silly thing to say. Since when has a production plant taken up anything more than “a small part” of the total area of any mine?

On detailed review of the EIS Resolution by the Company, it became apparent that some conditions are inapplicable to the Molejon operation, and others have already been satisfied by the Company.

More number fudging. Of the 45 requirements, all we know is that “some” and “others” are not a problem. Is that 3 requirements? 27? 14? 42? We don’t know, but given the history of deception and lies you can bet your sweet bippy that it’s at the lower end of the numbers scale. And I’ve mentioned it before but I’ll mention it again; just one of those 45 requirements is to locate, design and build a tailings dump at Molejon. To understand just how amateur this company is, consider it was seriously thinking of going into production without a place to put its waste. A tailings dump is not something you can whip up in the space of a couple of weeks; it’s a complex piece of engineering and it will take a long time to get EIS approval, even once the mine gets it act together and submits a plan. These people are the Keystone Kops of junior miners.

The Company therefore established the working group to cooperate with ANAM to ensure that all conditions are satisfied or waived, so that full commercial production in 2009 will take place without delay.

Notice that flourish at the end, “without delay”? Laughable. This is the same company that promised production (and check these links cos I’m not making this up) “in the first quarter of 2008″ then “in fiscal year 2008” then “in the latter half of December 2008” and then “in the first three months of 2009”. As each deadline passed, the production start was booted forward. And now the company has the brass neck to say it will start production in 2009 “without delay”. Are you beginning to see why these jokers can’t be trusted?

Yeah, so what? Want to tell me what the alternative to this is?

ANAM has recommended that it, the Company and the Republic of Panama Ministry of Commerce and Industry (“MICI”) work on a tri-lateral basis to fulfill the terms and conditions of the EIS Resolution, and this collaborative effort is underway. MICI is the Governmental organization with overall jurisdiction over the Molejon Project.

This is where the interesting political angle raises its head. On May 3rd 2009 Panama has its Presidential election and Fifer’s friend Torrijos loses his job. One of the hot issues in the election will be the environmental mess caused by dirty miners such as Fifer at Molejon and its very likely that the new President (whoever he or she may be) will not let Molejon move ahead (after all, it’s only got this far due to the ‘close relationship’ between Fifer and Torrijos). With MICI in on the decision process, politics is about the get difficult for Fifer&Co.

The Company has advised ANAM that it has reached the stage of pre-production testing and equipment calibration at the Molejon Project Site and, at ANAM’s request, has provided ANAM with a comprehensive data package describing such testing procedures, which will include the production of gold. The Company anticipates that its on-going consultation with the Governmental Agencies will result in a smooth transition into full-scale commercial production in 2009.

Check those links above and remember how many times PTQ.to has ‘anticipated’ things that have not come to pass. Also note “include the production of gold”. How much gold are we talking here? Otto wagers about 5 to 10 ounces as part of the test runs, but whatever it is it’s about as likely to be commercial as a flying pig.

The Company has been advised that ANAM has rejected a reconsideration request by the Company and its subsidiaries and Minera Panama S.A., (formerly Minera Petaquilla, S.A.) against a US$1 million fine imposed by Resolution dated November 13, 2008, for alleged violations by such companies of environmental laws that took place on the main Petaquilla Copper Concession in 2005. The Resolution also assessed damages in the amount of US$934,694.54. The Company has been advised by Panama counsel that there are several grounds on which the validity of the Resolution can be challenged. The Company is currently assessing the situation to determine what action, if any, should be taken. Consequently, the amount, if any, that may ultimately be payable by the Company cannot be determined.

This is the bonus prize, removed even from the ongoing EIS compliance procedures. What we’re supposed to believe is that ANAM fine PTQ.to $1.93m, then ratify and confirm that decision, but then PTQ tries to make believe it can get out of paying the fine and get final EIS approval from the same people at the same time! Anyone who thinks this is remotely possible knows nothing about Latin America.