On April 9th, LatAm’s worst mining company Petaquilla Minerals (PTQ.to) published this PR that claimed the company had made first gold pour (even though it was under a governmental stop work order due to its manifold environmental violations and had no right to do anything on the site, let alone produce gold) and that, to quote the lying scumbags:

“The Company maintains its previous estimate that the processing facility will reach its full rated capacity of 2200 tonnes per day in June 2009.”

So here we are in June 2009. Now for sure it’s only June 2nd and we could give the company another 28 days to make good on its prediction, but somehow I don’t think they’re going to make it. Why? Because it’s difficult to run a gold mine after you’ve laid off your workforce.

This report (Spanish language) documents the clashes between riot police and the 400 workers at PTQ.to’s Molejon mine who were suddenly and unexpectedly laid off by the company late May. The sacked workers proceeded to block the local main road in protest until the men in green moved in with sticks and tear gas. Eleven of the sacked miners were arrested (including this dude). 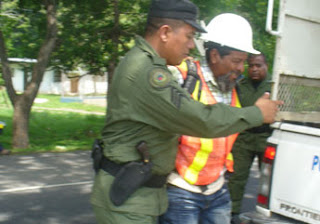 “Lost your job? No money? Let me give you a ride to the station, sir.”
So you gotta wonder, what with nobody working there and that, if the company is going to make that June deadline, yeah? Isn’t it strange how these things never get reported by the English language mining media that is too sycophantic to say anything against Canadian mining companies working in LatAm? This company stinks, Kosich, Wheeler, Koven…write it up.