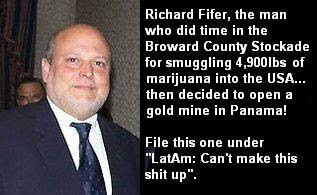 The Office of the Ombudsman in Panama (Defensoría del Pueblo) today published the findings of its investigation in LatAm’s worst mining company, Petaquilla Minerals (PTQ.to), currently permanently laying waste to the environment of first growth rain forest around its operations under the stewardship of its CEO, convicted drug runner Richard Fifer.

The report published by the Ombudsman can be found on this link right here (Spanish only) so link-thru and knock yourselves out, but in a nutshell it takes into account 23 (yep twenty-three) different considerations of illegal or reportedly illegal activity by PTQ.to and makes seven resolutions, the main three of which being directly significant to PTQ.to are:

1) The Ombudsman states that Petaquilla Minerals has violated Panama’s constitutional right of a healthy environment by proven acts of pollution, non-compliance with laws and abuses of rights (I mean hey…why mess with breaking a piffly law or two when you can go the whole hog and violate the country’s constitution, right?).

2) The Ombudsman recommends to the Ministry of Commerce (MICI) and the Ministry of the Environment (ANAM) that they take steps via some precise and existing laws to stop all activity at the mine immediately.

3) The Ombudsman recommends to the Ministry of Commerce (MICI) that it moves to rescind the contract of Petaquilla Minerals under the law of “Substantial Non-Compliance” that’s part of the Pananamian statute.

The ministries now have 30 days to get their acts together and move on this. It explains why the company says it’s finally commissioning its mine but the stock has done nothing despite the BS pump PRs and ridiculous cheerleading from corrupted Panamanian websites that try to part expats from their retirement lump sums (and are seemingly unwilling to run today’s news on Fifer’s craphole…what a surprise, Don Wanker).

The sooner this thing is shut down forever, the better it will be for the world. PTQ.to is a prime example of the kind of rancid operation that gives the whole world of mining a bad name and gets dirt thrown at the good as well as the bad. Meanwhile, the sycophantic Canadian mining scene just keeps it mouth tightly shut about the stock and the scumbags running the company; it’s about time you learned how to weed out your own, boyz.