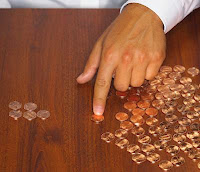 Jan. 26 (Bloomberg) — Petroleo Brasileiro SA, Brazil’s state-controlled oil company, will seek to cut costs by as much as $4 billion annually to prevent debt from swelling after the company announced a $174.4 billion five-year investment plan.

So I’m still neutral on Petrobras stock. I’m reasonably bullish on the company and what it will do for Brazil in the long term future, but because shareholders are not the raison d’etre of PBR there’s no reason why you or I should prefer it over CVX, COP, XOM or whatever other bigoil takes your fancy. 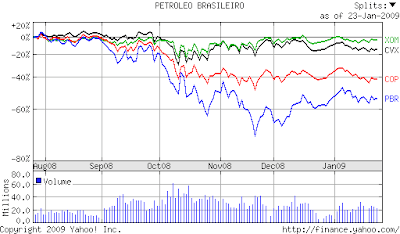 Bottom line: When you see PBR “cutting costs”, one of those will be not leaving money on the bottom line, too. To risk labouring the point, if you have a state-run megacompany and you have the choice between taking out debt and paying out dividends to foreign investors, the decision takes about half a second to make. IKN is still neutral PBR.

PS: Check out this five year comparative between Brazil’s Vale (RIO) and Petrobras. Another eye-opener. Works just as well on a six month period, too. Think about it.