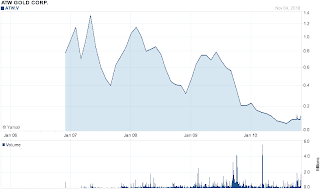 Watch out greenhorns, ATW Gold (ATW.v) is being resurrected by the outright scumbags Graham Harris, Brent Butler and Andrew Bowering, authors of one of the most disgusting episodes of blatant frontrunning insider stock sales in recent memory. The whole sordid story is documented on this link (scroll down for several posts) so I’m not going to go into it too much here (kinda makes me queasy just thinking about what those poor excuses for human beings got away with), because here we’re noting that ATW.v is looking to try and work its scumball magic on a new set of suckers.
First up, let’s note the sweetheart options deal just handed out to insiders and the way scumbag supreme Graham Harris (ex-Canaccord, what a shocker) has been loading up on cheap stock (from part of the dirty cash he made off with via his deplorable frontrunning insider sales last year, no doubt):
And second, here’s this week’s NR from ATW.v that, magically, sees the company trying its luck in the latest hot sector for mining, rare earths. Seems like ATW.v has picked up some sort of REE property and will try to reinvent itself in a sector already replete with shysters and overpumped dogs.

IKN says: DO NOT GO NEAR ATW GOLD (ATW.v). Leopards do not change their spots, these people have the most awful record of ripping off shareholders and using the corruptible mining media to promote their bullshit….and they’ve proven without much doubt that they have no idea about actual mining (they know all about mining other people’s pockets, however). These people should be in prison and would be in any other country than Canada, home to the world’s most toothless regulators. DYODD dude, but you’ve been warned about ATW Gold now so don’t come running to me, ok?