Plan Colombia and Beyond 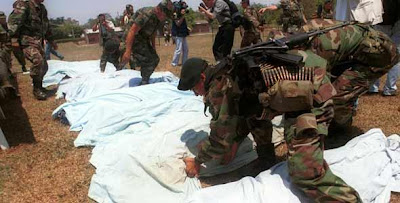 A photo from Soacha, Colombia. The army claimed these bodies were FARC soldiers.
They were later shown to be “false positives”.
The blog Plan ‘Colombia and Beyond‘ does such a great, great job covering its subject that it’s difficult to praise it highly enough. For example, check out today’s post that reports on the recent UN investigation into Colombia and its “false positives” scandal, where the army rounded up innocents, shipped them to the jungle, murdered them, dressed them up as FARC soldiers and pretended they were downed in battle…..all for the sake of gaining extra days of leave.

Here’s the link to this outstanding ‘Plan Colombia’ post. Use it today and often, cos it’ll open your eyes as to what’s going on in the country. Remember, this is the same Colombia that Canadian dumbasses at two-bit ratings agency DBRS think is worthy of the ‘investment grade’ rating. Who gives a crap about human rights anyway? Just give us your money….right?