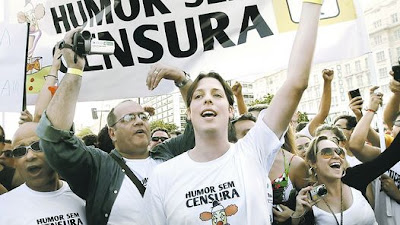 Yesterday saw a march and protest along Rio’s Copacabana beach. About 50 comedians, some of them famous in Brazil, wore specially made T-shirts and red noses to parade up and down Brazil’s most famous beach and were joined by a big crowd of people that either agreed with them, or wanted a stroll, or were looking for an autograph. And the protest? It’s against a recent ruling from the “Superior Electoral Tribunal” (the election judges) that prohibited radio, TV and internet programmes and shows from (and we quote) “using tricks, montages or audio or video effect that leave candidates parties or electoral alliances ridiculized”. The court ruling also said that future production of such programs would be suspended.

After all, just the subject of Brazilian politics is set up for satire. The politicos there have long been the butt of jokes and quite right too as the vast majority need bringing down a peg or two hundred. But in its push to be seen as a serious country these days Brazil is achieving just the opposite; this kind of pettyfogging just makes the country look more stupid than before.