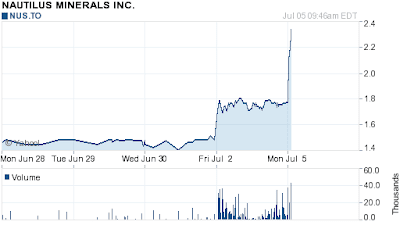 Here above is the chart for Nautilus (NUS.to) (NUS) and you’ll note a pretty impressive climb in the last couple of days, up as much as 70%. The reason is this pump job linked here, published by scamster Frank Porter Stansberry and his crew.

Look the guy is a total scumball that preys on investing sheep, but I have to give him credit for one thing; he’s smarter than the average scumball. Y’see, when Stansberry published his “OH MY GOD YOU GOTTA BUY BUY BUY THIS THING” promo pump last week, promising to reveal all on July 12th in a ConfCall or on July 8th to “special” clients who paid up moolah, he left so many breadcrumbs in his teaser that anyone who knows the sector could work out it was Nautilus he was talking about (gold a mile under the Pacific, 5000km from his hometown etc etc…this is a natch).

So what happens? The investment players think they’re all smart, think they’re getting a run on Stansberry’s promo and buy into the stock now. They don’t see what StansberryScumball is up to:

He’s already bought in and he’s selling into this move right now.

Or in other words, the people who think they’re clever are the ones getting played like violins. DYODD. 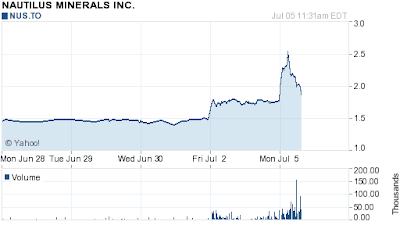 You gotta almost feel sorry for the poor suckers that buy into such an obvious BS pump jobs–GOLD SANDS on the ocean floor, highest grade ever, worth billions of dollars and only Porter Stansberry can tell you about it–. The problem Stansberry faces is that each sucker is only good for one pump as anyone naive enough to believe this crap ain’t got no money anyway. Now if Stansberry and Co. could really make 1,000 to 10,000% gains all the time and put $10,000 into one such GOLD SANDS each year, in five years they would be worth a billion dollars. Two more years they would be the richest men on earth. They obviously ain’t and have to resort to pumps like NUS to scrape by a living bilking widows, orphans and tea-baggers.