Bina makes for a good read this morning. Plenty of prose to chew at her post linked right here but I thought I’d get to the grain and go to the sources. Here’s one:

Intolerant governments across the globe are “slowly crushing” activist and advocacy groups that play an essential role in the development of democracy, U.S. Secretary of State Hillary Rodham Clinton said Saturday.

She cited a broad range of countries where “the walls are closing in” on civic organizations such as unions, religious groups, rights advocates and other nongovernmental organizations that press for social change and shine a light on governments’ shortcomings.

Among those she named were Zimbabwe, the Democratic Republic of Congo, Ethiopia, Cuba, Egypt, Iran, Venezuela, China and Russia continues here

And here’s the evidence Hillary is talking about…… errrr….. from the G-20 summit in Toronto. 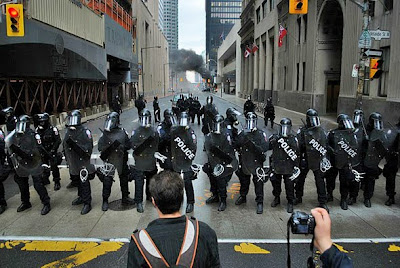 Go read about how they treat Globe&Mail reporters, too. Cute.