For this (picture source and AP report here): 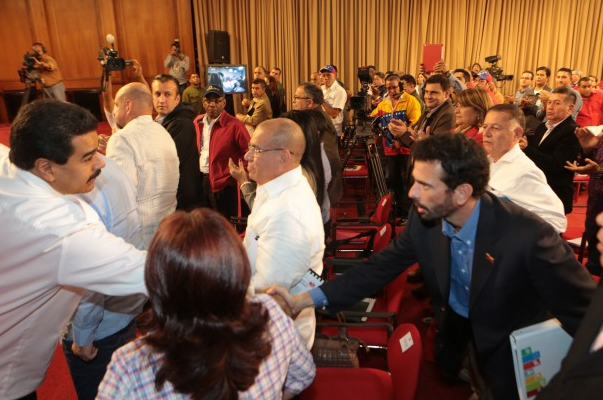 First and foremost the praise is for Henrique Capriles, for accepting the invitation to the Presidential Palace and attending the crisis meeting along with other regional governors. The meet was to talk about ways to crack down on the spiralling crime and murder rates in Venezuela in the wake of the death of Monica Spear, ex-Miss Venezuela, and her husband who were shot dead by a gang of roadside thieves.
Capriles was invited but nobody would have said anything new or particularly damning if he had decided not to attend, the bad blood between him and Maduro/his government is known to all. But attend he did and that shows a higher level of responsibility than has been on display for basically a year. Good for you Henrique, good for Venezuela too. Yesterday was a real opposition politician on show, let it not be the last time.
Praise also for President Maduro, who first invited Capriles along with all other regional governors and then made for the photo opportunity you see above by going over to his sworn political enemy, thanking him for attending and shaking his hand. The image is more than merely symbolic, it’s a chance that something, however small, can come from the Spear murder (see that AP report for an outline on crime figures and associated experts talk). So well done Nicolas for being…well…for being Maduro* for once and setting aside the highly aggressive rhetoric in order to attempt a solution to Venezuela’s most serious problem.
I have to say that I’m not particularly optimistic on the chances of seeing a pivot point in the Venezuela crime and violence wave, but I’ll take the current ray of hope and cling on hard for the time being.