President Santos, better than Uribe by about….. 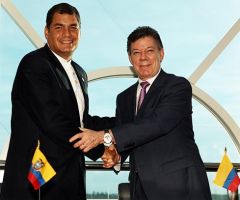 ….a light year.
I thought I might be able to put up with Santos as Colombia’s President but I never thought I’d actually like him. He gets down to talks with Chávez, reaches agreements on amicable terms based on mutual respect. He patches up with Ecuador and gets the countries back on diplomatic terms, he makes the meetings with regional and local leaders all the time, is there for UNASUR, for Kirchner’s funeral (at the drop of a hat he was in that plane and flying down to Buenos Aires), for next week in Mar Del Plata Argentina, next week at the UN, next week in Mexico for the Climate Change bash etc etc. And at the same time he’s getting hard with the FARC and making significant progress against those scumbags without pissing off his neighbours in the slightest.
You go Juanma! Keep it up, man. Colombia made a good choice.