A big thank you to Tim’s El Salvador blog for the image below. Quite simply, Tim runs the best English language blog about El Salvador out there and does a high class job. Visit early and often and get wise to the country. 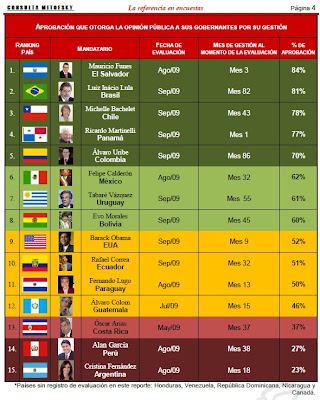 (click to enlarge and for better focus)
The chart is taken from the nice people over at Mitofsky, who put together these poll-of-polls every couple of months or so. The columns show the country and President, the month of the last poll (either August or September) the numbers of months s/he has been in office and the approval rating.
You’ll note that Hugo isn’t on the list. He polled 58% last time round, according to the pretty reliable Datanalisis polling firm.