“If it looks like a duck, and quacks like a duck, we
have at least to consider the possibility that we have a
small aquatic bird of the family anatidae on our hands.”
Douglas Adams

It started on Friday, when Prize Mining (PRZ.v), a company that’s been been paying all and sundry in the paid-pumper whoredom world of “sponsored coverage” since inception, once again came out with a laughable NR. This time, the grant of 3.2m incentive options came with an extra special CEO’s kicker at the end:

On seeing the NR, I had a little chuckle on Twitter and called it freakin’ brazen, but as the day wore on the whole brass neck thing, added to the way it pumps itself to the dumbass end of the sector, got the better of me. I wrote this: 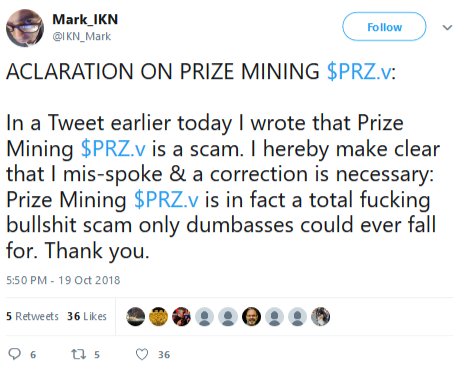 And wrote it because that’s exactly what it is. The scam is writ large in this one, the old and worn path of the spivs and BSsers clear for all to see. So imagine my surprise and glee when none other than the President and CEO of PRZ.v turned up in my little Twitterworld and left his thoughts on my opinion of his company: 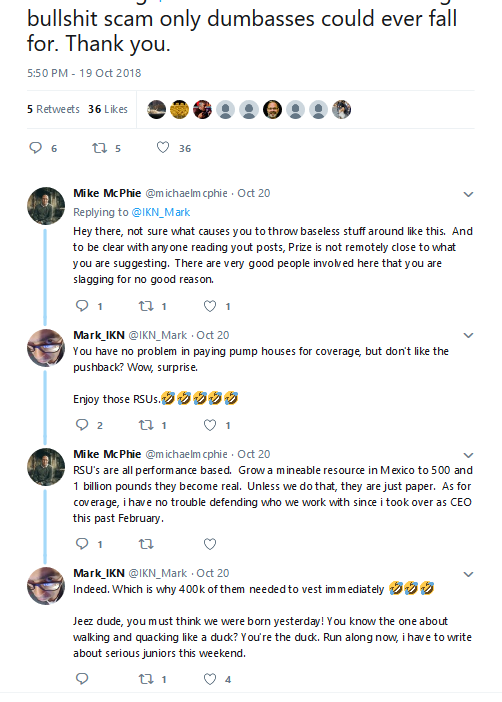 I mean, when he defended the RSUs he’d just been slushed as “all performance based” and “just paper”, did he seriously think we only read three-quarters of a news release and then just stop reading at the end? And just for good measure, I published another tweet especially for him as well (but amazingly, he didn’t bother answering this time 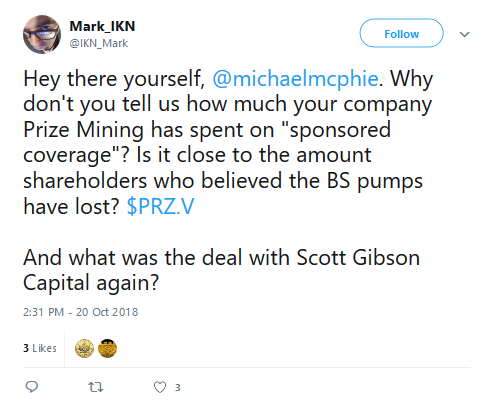 And that was that, right? WRONG! Because your humble scribe laughed like the proverbial drain this morning when the very same Prize Mining and Michael McPhie announced the following (IKN adds bold type) before the bell today:

CALGARY, Oct. 22, 2018 /CNW/ – PRIZE MINING CORPORATION (“Prize”
or the “Company”) (TSXV:PRZ) (OTCQB:PRZFF) (MQSP:GR:FRANKFURT) is
pleased to announce that it has retained Link Media, LLC (“Link Media”)
to further build awareness and provide communications and market
awareness services aimed at maintaining and building the profile of
Prize among existing and potential shareholders.

Link Media will arrange and disseminate independent third-party
research articles. Each article will be reviewed and approved by the
Company and will be subject to editorial control to maintain consistency
amongst the published material to ensure that information is consistent
with the Company’s public disclosure filings on SEDAR.
Link Media is an arm’s-length service provider to the Company for an indefinite term and will be paid $100,000 USD
in cash under the engagement for its services to the Company funded
from the Company’s general working capital. To the knowledge of the
Company, Link Media does not own any of the Company’s securities.

Yes folks, straight after awarding himself 400,000 vested RSUs, McPhie pays a New York pumphouse another $100,000 for “sponsored research and coverage”, i.e. a glowing report with a crazyhigh target price that will be shoved in front of the naive and pop the stock, just at the right time for a whole bunch of insider sales to benefit. You cannot make this shit up, all with the seal of approval of a CEO who cried foul if you dare to speak even 140 characters’ worth of truth about the scam he heads up.