On June 23rd Integra Gold (ICG.v) announced its “Gold Rush Challenge”, idea to crowdsource “the next big Val D’Or discovery” (or something) that would put up a prize of up to CAD$1m for the person or people who helped ICG make a big hit win. Here’s an excerpt of the NR:

The Gold Rush Challenge
Online prospectors will analyze and interpret the data to come up with a plan on where they think Integra has the best chance of making a major gold discovery. Further details on what specific types of submissions the Company is looking for will be announced in the coming months, prior to the database being made public in September.

The prize of CAD $1,000,000, which will be broken out into a number of categories, will be awarded to whomever comes up with what the Company and the competitions board of advisors believe is the highest probability location for a major gold discovery. Integra has already made significant headway in raising the award money through sponsorships and plans to announce the winners next March in Toronto at the PDAC mining conference. continues here

At the time your humble scribe registered the idea and thought it interesting in that out-the-box way, without going overboard on the idea. At least somebody’s trying something different was my main mental comment. Didn’t think much else of it, though (not really my neck of the woods).
Anyway, Quebec’s geologists don’t want mining companies doing anything stupid such as making money or being innovative or making themselves popular with the general public. IKN today intercepts this mail sent to ICG a few days ago by a lawyer representing L’Ordre des Géologues du Québec (aka Official Canucky Rockbanger Club): 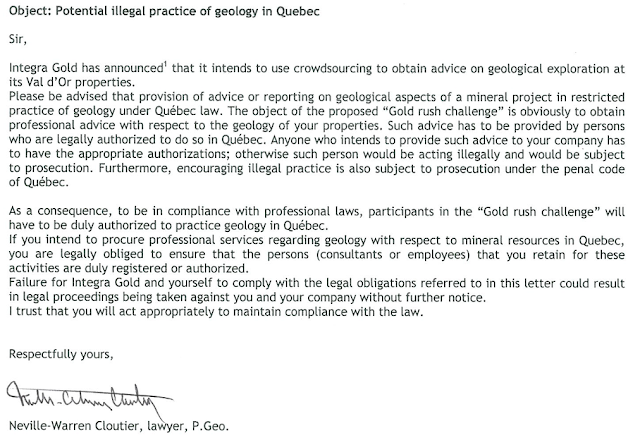 Shorter: We’re going to protect our jerbs from your smartass ideas.