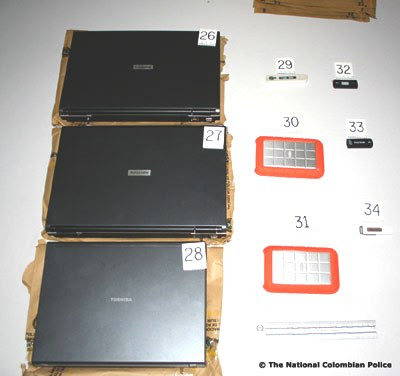 I find it amazing that yesterday’s revelation (no other word will do) there were no e-mails on the Raul Reyes FARC laptop computer hasn’t made any headlines this morning. I’ve just checked on Google and nobody’s running this story outside of fringe media in the Spanish language.

Surely you remember how world publications up to and including The Economist told us about the “huge caches of e-mails” that implicated the world and his wife (most notably Chávez, but natch natch and thrice natch, yeah?). In fact that Economist note is shown to be a very large crock, as it makes constant references to e-mails that (and get this very clear) do not exist.

This is, of course, precisely why the media won’t be dwelling much on this story. The news that the “thousands of e-mails” they used to whack those nasty lefty people over the head with do not exist is rather embarrassing. So in true style, the story will be ignored and spiked in newsrooms around the world. Not a single apology, not a single correction.

It does remind me of the pristine condition of those laptops, as shown by Colombia to the world in May. That’s the official police photo above….I mean, just look at it. There’s not a scratch on those machines. Don’t you find that slightly weird for three pieces of computer equipment carried round the jungle by a bunch of terrorists? Don’t you find it weird after Reyes and his cohorts had the crap bombed out of them by several bombing runs and then commandos piling in to give them les coups de grace a few minutes later? And then there was this story uncovered by Daniel Denvir….the one about how the photos that Colombia leaked as from the FARC machines were proven to be Colombia intelligence snaps.

Welcome to the blogosphere. Raw news, unfiltered, undumbed-down, treating you like a thinking human being.