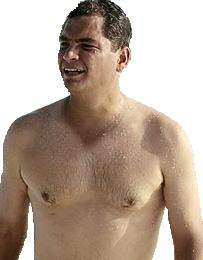 Wow, eleven replies to last night’s question! Not bad in such a short space of time. And even better is that nine of you got the answer right. The correct answer is that:
They have all visited Cuba
Yep, that’s six heads of state racked up by Raul inside the first two months of anno domini two thousand and nine. For sure Chávez isn’t much of a surprise, but Bachelet? That’s the first Chilean visit since Allende if memory serves (historians feel free to correct). And Martín Torrijos made his second visit in less than a year. The USA losing regional influence? Surely not!

Anyway, the winner is the fabulous Bina, who managed to get her answer timestamped at 9:10pm last night, less than an hour after I hit the ‘publish’ button. Good job and rapid fire, Bina. The prize she asked for is a nude photo of Rafael Correa, which explains the image above. Waist-up only, Bina (though I can confirm Correa = 10X Berlusconi).

The final word goes to the most eloquent answer received, from reader MH. A very nicely written mail and deserves a wider audience. Particular agreement Chez Otto for the last sentence:

Well I’d say they’ve all managed to catch the attention and likely ‘outrage’ of a certain group of Miami ‘exiles’. The cause of this outrage is most likely because Bachelet, Chávez, Colom, Correa, Fernández and Torrijos have been able to have a native mojito with real Cuban mint and rum unencumbered by an embargo and travel restrictions, which means unlike a ‘real’ democracy all those leaders of faux ‘dictatorships’ have been able to visit Cuba in 2009.

I don’t know if this however is held in common between all those leaders – but I hope it is true given how much Cuba has helped Latin America (Guatemala, Venezuela, and Ecuador I am sure about) – that all of these leaders have also pledged to help Cuba rebuild after the devastating hurricanes last year. The people of Cuba are amazing resilient, but they should never be forced to go it alone.