This article, first published here on September 30th, is getting a re-airing due to popular demand. It seems that there are a few mining sector investors who care about these things after all, not just psycho-obsessives such as your humble scribe.
xxxxxxxxxxxxxxxxxxx
Peru’s dirty little mining secret is getting bigger and dirtier
This, quite honestly, beggars belief. Yesterday’s Peru metals production figures bear witness to the ongoing environmental disaster that is the Madre De Dios Amazon Basin region, the wholesale rape of one of the world’s most ecologically sensitive regions and the utter tripe and two-faced lies spewed by President Alan Garcia, his lying toady of an Environment Minister Antonio Brack and the total disregard Peru has for anything except genuflexion at the altar of growth and short-term profit.

Here’s the updated table, which shows….

Even more telling is this next chart, that shows the percentage of MDD gold to the total produced in Peru every month. Because of the drop in gold production in the big mines in the North of the country (as noted yesterday) Peru’s mining industry and exports statistics are evermore dependent on the gold coming out of MDD. Last month the percentage of gold from MDD to the total shot up to a new all-time record of 13.02%, over a full percentage point higher than the previous record and a mile above the typical 10% range.

IKN now directs your attention once again to that April 2010 drop in production at MDD. This is because for just a couple of weeks, world attention (via a couple of reporters and articles) was focussed on this disaster area and the government pretended to clamp down on the illegal and immoral industry. It was the month Minister Brack pretended to wring his hands and do something about the problem, saying things like….

“This is not small or artisanal mining. This is large-scale mining camouflaged as small mining and these dredgers generate destruction in the ecosystems of rivers, impede the reproduction of fish and dump mercury and waste into the rivers.”

….as he promised to clean up the MDD region and punish the wrongdoers. So as you see, Brack is fully aware of the problems and the deep damage that’s being done to the ecosystems of MDD. But as the current production figures clearly state, he’s done absolutely nothing to stop the disaster. On the contrary, it’s now even worse…I mean, what do all-time record production figures say to you? Brack is a liar and a scoundrel of the highest order and should hang his head in shame.
As for South America’s most unpopular president, the unspeakably bad Twobreakfasts said this to soothe the world and provide “oh yes we care” soundbites at the time:

“We want to stop informal mining from poisoning the rivers of our country, from destroying the environment, from enslaving young people and child labour. (This makes us) look like a backwards nation in the eyes of the world.”
“What’s happening in Madre De Dios is atrocious, the rivers are the colour of mercury, of arsenic. This is dramatic and this is not only registered in our country but it also reaches Brazil. We may at any moment be judged internationally because of allowing a chaotic activity.”
“One day Brazil may organize a protest against us because everything that leaves Madre De Dios ends up in Brazil and finishes in the Amazon River in some way or another. How will be able to defend ourselves for having allowed such savage mining?”
“What we will do with Minister Brack is show that the State wears the pants and can decommission these dredgers to stop them working in the worst of these manners”.

As is 100% clear, it was all talk and no action. The hypocrite has turned his back on the problem and just wants to keep counting the filthy lucre that it generates. And yes, I hope Brazil and the world sues you fat lard ass one of these days, you doublespeaking rat.

This is Peru 2010, ladies and gentlemen. Ruining the world for the sake of its desperation for growth. When the subject is “growth at all costs” there really is no better example than this scandalous industry in MDD and the equally scandalous government that allows it to continue.IKN leaves you with a few photos of what used to be Amazon basin jungle: 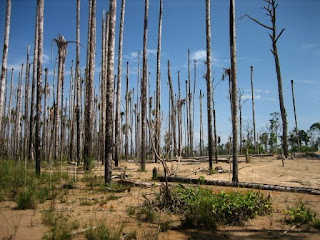 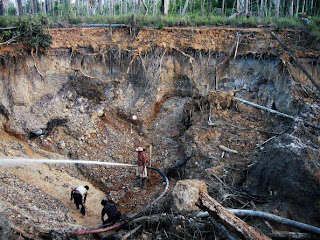 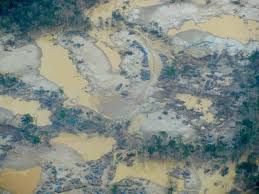