So I get this mail today from some dude worried that “The Communists are going to win in Peru” this Sunday. By this he was referring to the rise of Susana Villarán in the election for the Mayor of Lima, now firm favourite to get the job after polls show her with a lead of up to 12 points (40 to 28 vs main rival Lourdes Flores).
It made me reflect on just how ignorant people are. Villarán is no communist, she hates the Chávez regime, she’s one of the few that stood up to the totalitarianism of Fujimori in the 1990’s and was a minister in the highly successful transition government of Valentin Paniagua in the early part of this decade when Fujimori fell from grace. But because some media channel or other has decided that Lourdes Flores (centre right) is their gal, Villarán (centre left and not an inch further left than that) gets lumped in with the goddam pinko commies to scare the crap out of people who just can’t be bothered to look beyond the headlines. The person who mailed me wanted to know whether selling Fortuna Silver (FVI.to) was the right thing to do cos of this new and evil Commie threat! No matter that FVI operates over a thousand Kms from Lima, no matter that the price of silver is far more influence than local politics, no matter that Villarán has declared herself and her party 100% pro-business….better to swallow the bullshit spin and hype, isn’t it? It’s no wonder the  ignorant and uninformed lose so much money in the markets every year.
And then this Guardian article below hit my screen. Not Peru but Brazil (and with today’s best photo included), the connection was still clear enough. Read it yourself and see what I mean, because it also applied when the investment community got scared of ‘Chelle Bachelet in Chile a few years ago and said her Commie background would ruin everything. Right wingers really like reminding us all how freakin’ dumb they are, don’t they? 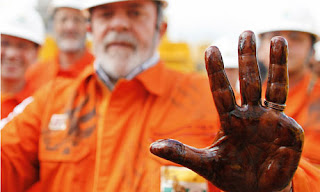 For years “Lula” was a dirty word at Brazil’s main stock exchange, the Bovespa in São Paulo. The mere mention of the fact that Luiz Inácio Lula da Silva, former union-leader and once a ferocious anti-capitalist, had his eyes on the presidency was enough to send shivers through international markets. In the lead up to Lula’s historic 2002 election, Brazil’s currency plummeted as overseas investors fretted over what the country’s first working-class president might do to their balance sheets.
Times have changed – and Lula knows it. “Ten years ago I’d walk past the [stock exchange’s] front door and people would shake with fear. They’d say, ‘Where is that capitalist-eater going?” Lula joked last Friday, as he returned to the Bovespa to unveil the largest share offer in world history: the sale of $70bn (£45bn) worth of shares in the Brazilian energy group Petrobras. CONTINUES HERE