Regarding Press Freedom: Mexico teaches ’em how to really gag the press 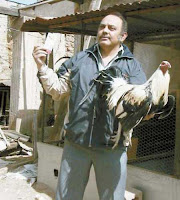 Carlos Ortega Melo Samper, QEPD
After my rant about the BS lies being perpetrated by rank amateur journalists serving up cherrypicked “facts” and one-sided crap in Bolivia yesterday, today it’s worth checking out real tales of high-order press gagging in Latin America. It’s called “kill the reporter” and it does tend to keep them quiet afterwards.

Carlos Ortega Melo Samper was shot to death on Monday in the northern Durango region of Mexico. He had recently published a report outlining corruption in the local municipality in question. Furthermore, he clearly feared for his life, as on April 29th he wrote a letter to his newspaper, Tiempo (de Durango), in which he wrote that he had been threatened by the municipal President of Durango, Martín Silvestre Herrera, and two other local government associates of the municipal president, Juan Manuel Calderón Herrera and Salvador Flores Triana. The letter was not published in the newspaper, perhaps under instructions from the now dead journalist. The newspaper editor has been quick to point out that the case is not connected to organized crime, but political corruption and graft.

Meanwhile, Prensa Latina has published the list of 11 journalists murdered in Latin America in the first three months of 2009. The 11 unfortunates now joined by Carlos Ortega Melo Samper include three from Mexico, two from Colombia, two from Venezuela, two from Honduras, one from Guatemala and one from Paraguay……and none in Bolivia.