Regarding racism and Brexit

Reader ‘LJ’ is a long-standing reader of IKN and we’ve exchanged many mails over the years. He wrote in this morning regarding Brexit and the previous post and included this line.

“My gut instinct would be to vote leave if I were in a Brit’s shoes. No
reason but nationalism. I’m all about self determination at nearly every
level. I don’t even know why, nor do I think about it much. But when
I’m told I’m racist for holding that position, I can only shake my head.
I know some racists hold the same view as me. They probably enjoy
having 3 square meals, a good night sleep and a shower too.”

That needed a reply and what’s more, after reading a couple of other mails received this morning it’s an issue that needs further clarification (if only to stop any more mails from coming in, so here’s what I wrote back to LJ:

I’ve woken up to plenty of mails, yours is the one I’m replying to first.

No,
nobody is saying you’re a racist. What I’m saying, because it’s true,
is that the Leave campaign was co-opted by racists. Before Farage
imposed his agenda on the larger Leave campaign they were losing
clearly, it was roughly 46/54 in polling. When Leave changed tack in the
last few weeks and began to use the UKIP campaign ideas, it rose in the
polls. Farage and his party is a minority who swung the votes, perhaps
4% perhaps 10%, my best guess is 6% but he swung them all right.

So,
in ballpark terms you have 46% of people who voted Leave for other
reasons than plain straight racism. And 6% because they’re xenophobic. I
have no doubt in my mind that you belong to the larger group.

However,
my vote was for the anti-vote of Remain because in deciding Leave, the
UK has now empowered Farage to the extent that he will set public
opinion. And i’m well aware of Godwin’s Law but it needs to be said
anyway; the rise of a certain political party from 1929 onwards began by
their co-opting of the political mainstream as a small-scale minority
party, coat-tailing itself into the debate by providing a small but
necessary part of a large coalition. 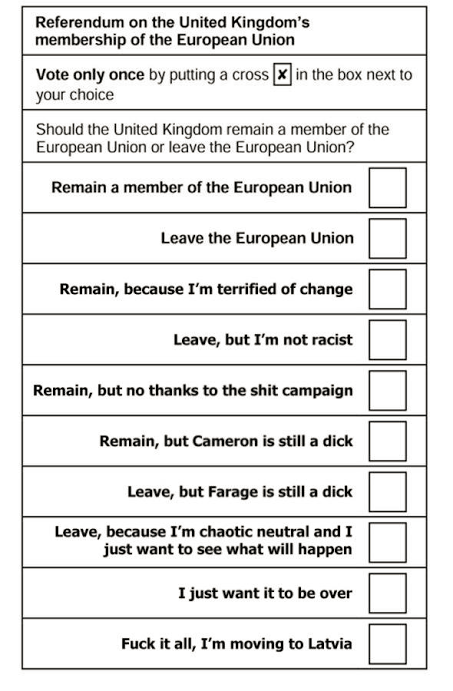