With Bloomie blasting silly headlines about Chile’s Peso (CLP) being “the world’s best currency this week” and Colombia’s “the worst“, I thought it was high time to revisit the evolution of local currencies versus the dollar and get a bit of perspective. This one year chart…. 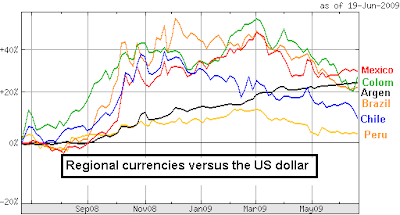 …..shows the various rises and falls (or in Argentina’s case rises and rises) against the dollar for the major locally floated currencies (not much point in featuring the Vzla Bolivar Fuerte here, and Paraguay’s Guaraní…..well, it’s never going to attract the attention of George Soros, is it?).

The main takeaway? Some currencies are strengthing back more quickly than others. But in the end, when push comes to shove and despite all the worldwide handwringing about Helicopter Ben and his printing presses, the dollar is still the daddy. Every single major trade currency in LatAm is down against the dollar YoY, even the economic miracle packaged up for saps with a bow and labelled Peru. And with base lending rates dropping fast all over the region as countries try to stimulate growth, the attraction of parking cash at higher risk is lessening, too.

Anecdotally, if you ever need a lesson in what the term “reserve currency” really means come down here with a thousand British Pounds, or Euros, of Aussies or Loonies or even an ounce of gold in your pocket and try to exchange them for the local currency of your choice and at the same time get the same fair deal you’d get for the equivalent amount of USDs. They say travel broadens the mind………………