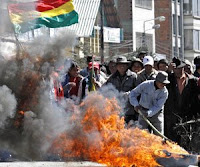 The story of the week in Bolivia has been, without a doubt, the attack on the home of opposition politician Victor Hugo Cardenas by Evo Morales supporters. The best write-up I’ve seen on the story is (as usual) Jim Shultz over at Blog From Bolivia and it’s linked for you right here. I recommend you check out Jim’s words to get the nuts and bolts of what happened last weekend, his normal sharp insight also comes for free.

Mine is a commentary, no more. Firstly, I join the vast majority of voices down these parts that totally rejects, condemns and speaks out against such mob-style vigilante movements and ask that the government of Evo Morales clamps down immediately on this action and doesn’t let it become a trend. Morales has talked plenty of talk about “equality for all”, and now he has to show he isn’t afraid of weeding out the bad ones from his own movement.

The episode reminds me that Bolivia’s democracy is still in its infancy. There’s a whole section of its population that have never been allowed into the democratic franchise before (about 60% of them, in fact) and now that they have some real political power the temptation to excess in the minds of some factions is clear. Morales’ job now, and it’s a tough job, is to get Bolivia out of the childish phase of democratic backlash and revenge-taking as quickly as possible. In a perfect world, last weekend’s episode will mark the end of it. We shall see.

Following on from that, I’m also reminded at the way the Central European Jewish community took their revenge on many members of the Nazi party in the period just after WWII. Of course this example is more extreme than the situation in Bolivia today. Of course it doesn’t condone the attack on Cardenas’ home. That said, authorities ostensibly rejected the summary executions by Jewish vengeance-seekers at that time but also, deep down, understood. Governments of countries all over the region stood back and watched the bloodlettings. To be quite honest, after what the Jewish people went through in the years previous I would have stood back and done nothing afterwards, too. The act of revenge for past ills is a primitive emotion and is not one confined to Bolivia 2009. Again and to emphasize, the indigenous Bolivian’s plight isn’t anything as dire as the Jewish shoah but it has stirred the same underlying emotions amongst its more extreme militants. Evo Morales needs to show, quickly and firmly, that his pacifist and reconciliatory message is good for all sides, not just eastern criollo white versus western indigenous brown. President Morales, impose the rule of law now, before it’s too late.

Finally, the roaring silence on this from the progressive English language blogs that cover Bolivia (you know who you are) does no service to the free and open dialogue that you say you want about the other bits of Bolivia 2009…all the coca leaf, racism, self-rule, new democracy, constitution-for-all etc etc. I’ve waited patiently all week and, Schultz at BFB aside, there has been nothing from the blogs that should cover the bigger Bolivian stories and inform the wider world about the real Bolivia. If it’s a big story that doesn’t fit with your vision of the shiny, new and wholly healthy Bolivia you cannot ignore the story out of convenience. Nuff said.