Remittances: a looming problem for LatAm

Here comes another problem for LatAm economies, and Otto has the lowdown and lots of charts to illustrate. Remittances from the industrialized nations are dropping off quite sharply, and that means trouble aplenty for places like Ecuador and Bolivia.

US remittances to traditional receivers such as Mexico and the other Central American states are a well-followed story, so being the contrarian knucklehead that I am I decided to go have a look at the other main source of LatAm remittances, i.e. Spain. The picture that’s developing is not a pretty one, sad to say.

Here we go with a few charts. First this one that shows remittances from Spain to all other countries up to 2q08 and is taken from the website remesas.org. 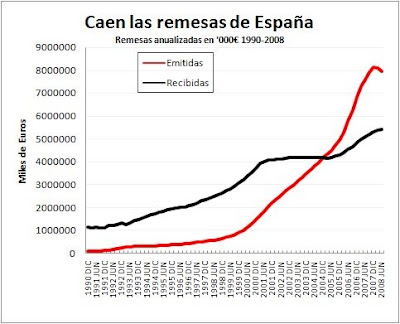 As we can see, the red line that shows the amount of Euros sent from Spain has dropped away for the first time ever. But this is only up to June 2008, so what can we expect for the rest of 2008 (and 2009 for that matter)?

If we look at the number of people from countries this side of the pond working in Spain, we can get some ideas. Here are some charts showing the number of legal workers employed in Spain since January 2006 on a monthly basis. It’s worth emphasizing that these charts don’t include the illegal workers over there, but all the same certainly give a good representation of the recent demographic trends.

Here is a chart that shows the five main LatAm countries of source for legal workers in Spain, namely Ecuador, Colombia, Peru, Bolivia and Argentina (FYI, next in line is Brazil with around 25,000 resident workers).

Now for some more detailed breakdown, starting with Ecuador as it has the largest number of legal LatAm workers over in Spain.

The drop-off in Ecuadorians working in Spain has been pretty sharp. The high summer season has 20,000 less workers than just two years ago, and since then the numbers have dropped sharply. October 2008 has less than 240,000 Ecuadorians on the Social Security register, and that’s 10% down from the same month last year.

The trend in seasonal workers is clear on this chart, but again we see a big drop in the last reported month of October.

Again the summer peak, and again the September and October figures are not forming the same rounded top of 2006 and 2007…the drop is much sharper.

There are more Bolivians than ever in legal work in Spain and there hasn’t been the same sort of drop as seen by the countries above….yet. Of all the countries mentioned, Bolivia has perhaps the most to lose. The absolute numbers of Bolivians in Spain may be lower, but their remittances account for around 10% of Bolivia’s GDP so the effect on this country is significant.

Notably, the number hasn’t fluctuated so much here. This is likely connected with the lower numbers of Argentines who live and work in Spain in the lower paid, seasonal employment sectors.

This final chart shows the total number of non-European Union legal workers in Spain (includes other countries such as China, Morocco etc).

Again the trend is clear; the drop off in numbers has started much earlier after the Spanish high summer season. There are less migrant workers in Spain. Period. And with the way the world is going, those numbers are very unlikely to move higher for the time being.

These charts seem to indicate that LatAm is more exposed than ever to a downturn in Spain’s economy in a very direct way, and that statement concerning my example nation of Spain is just as true for the other industrialized countries that are sources of remittances, such as the USA. The effect of an employment slump in any country is always felt first by the immigrant workers…it’s just the way it is, Mr. Hornsby.