Numbers were fine, nowhere near as bad as the rumour-BS merchants have been trying to make out for the last three months and the mine operations were decently profitable in 2q13. The bottom bottom line loss is due to a tax provision (note that post-quarter RIO.to got $21m in tax back from the nice people in the Peru government, a nice cheque to bank) but the adjusted net earnings of 6c/ share looks decent.
Revenues were as expected, though cost of sales at $36.7m came in about $6m higher than the IKN model expected (i.e. I’m a dumbass, not them). On the other hand, exploration and G&A have been cut and that helped cushion the ops costs hike (betcha it’s mostly about fuel costs). Here’s one chart…

…and subbers, we’ll go over all the other usual suspect charts this weekend. Guidance for the rest of the year looks decent, too (though on the MD&A script alone, they’re not giving it much hype-hype).

PS: And before you ask, don’t wait for a company to send out its NRs, go look on SEDAR.

UPDATE post-close: And the people who sold at a 7% or 9% discount at the open this morning after staring at the bottom line and not bothering to look at the underlying numbers, I wonder how they’re feeling now? 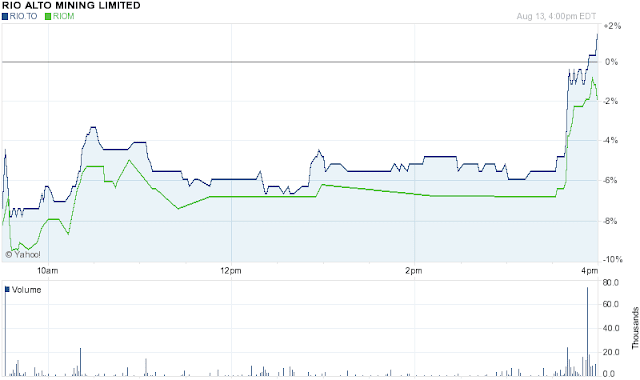