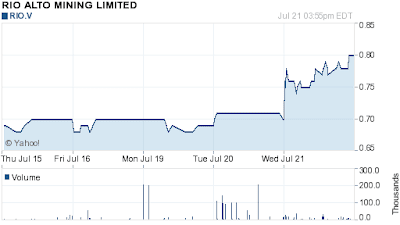 Last weekend’s edition of The IKN Weekly (IKN63) featured (amongst plenty other things) write-ups on several company meetings that happened during last week’s roadtrip. One of those was at the nerve centre of Rio Alto Mining (RIO.v) and here’s what subscribers got to find out last Sunday. Since then we had the news through that RIO.v has been awarded its key environmental permit and sure enough the stock traded strongly yesterday on that news. DYODD, but also file this one under ‘subscribers knew‘.

The meeting at RIO.v was outstanding. Present were President & COO Alex Black, Peru country manager Jaime Soldi (driving force in the company) and CFO Anthony Hawkshaw (the guy who really knows the purse strings). The main takeaway was the very high level of confidence exuded by the RIO.v team as regards the months ahead as they move to production. We talked about the main points of the project and how they were already doing what they could on a “pre-construction” level before the environmental and construction permits were emitted. On those scores, the company has fielded all observations made by the government of Peru and the company sees no reason to expect any problems. This was as far as they could really go with positive statements on permit timings that are, in the end, out of their control, but I’d like to add that on a personal opinion level and having watched permitting procedures go through the bureaucratic stages in Peru on several occasions, all this permitting procedure needs is a little (and not a lot) more time. Basically, it’s a lock and it’s going to happen.

As for the somewhat delayed resource study done by Coffey, we can expect that to be published “soon”. Again, the delays seem to be nothing of a substantive nature and rather the technical, procedural side of things that have to be waded through before the relevant authorities allow a report to go public.

Community-wise, relationships are reported as good. Money-wise, the CFO looked me in the eye and said that there’s no more money needed and there are no more equity raisings being considered for 2010….they won’t even start considering a strategic placement before La Arena starts operating and in the words of Alex Black, by that time next year “Rio Alto will be a completely different company”. Regarding the timeline to production, the company expects “mid 1q11” to be when the first pour happens and commercial production levels will follow on from that very quickly. Given a reasonable result from the permitting people that timeline will be achieved. Tight as it might seem right now. Again, confidence exudes.

The bottom line is that I trust my own judgment when it comes to juniors and the people that run them. From the numbers, from the people and from the newsflow about to run through the market regarding RIO, this author thinks the current 70c-or-abouts prices for RIO to be an absolute steal. As mentioned in last week’s Flash update I’ve added yet again to my position in RIO.v and it’s now a pretty big one compared to others. But once all the usual caveats are applied (gold price collapse, nuclear war, OhMyWe’reAllGonnaDie, etc) this stock today is one that needs its long argument banged on the table…and hard. I’m very close to upgrading it to a “Top Pick” on the back of last week’s meeting and its expected newsflow to come, but for the moment we’ll stick with the fact that I left that meeting then wrote “I’m buying more” to you subscribers about an hour later….and then did just that.

RIO.v is cheap. Buy some or buy some more because you will not regret doing so. Table-banging over, thank you for your patience.