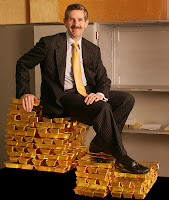 McEwen tries to make a point with his furniture
It was a pretty logical move, all told.

Today in this PR, Minera Andes (MAI.to) announced that McEwen is buying 121m or so shares of the company. The immediate result is to put $40m in the coffers which easily covers the $11.3m cash call imposed on the company by Hochschild (HOC.L) as 51% owners and operators of the San José silver/gold mine in Argentina. It will also pay off the $17.5m debt it owes to Macquarie and leaves the company with $12m or so in working cap.

But the big ownership news is contained in this passage of the PR:

Yup, McEwen just took control of the company. His stake in MAI.to dates back to when he was putting USGold (UXG) together to make a big move on the Nevada Cortez trend. As that hasn’t worked out so well (the truth machine and all that), mo’ MAI.to is a logical move.

The market likes the news so far; despite the massive dilution just announced, MAI.to is up 6.7% at $0.40. The good news (apart from the McEwen control) is that the company now has enough working capital to see it through. with silver spot now trading around $13/oz, Minera Andes may even begin to turn in profitable quarters in FY09; that’d be refreshing.

MAI.to was a favourite here for a long time, though it disappointed through 2008. Since the HOC.L cash call was announced your humble correspondent put it on the also-ran pile. Now it’s surely worth revisiting and looking at the company. DYODD, dude.