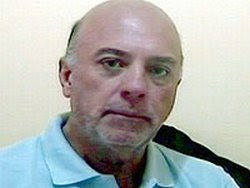 Romulo (for it is he)
Does the name Romulo Leon ring a bell? It might do, and when I remind you that he was the dude that was taped talking about bribes obtained from foreign oil companies in Peru, you’ll probably go “aaaahh yeah!…I gotcha, Otto.” Here’s how this humble corner of cyberspace reported the story way back on October 6th, 2008:

In the immediate fallout, then PM Jorge Del Castillo and the rest of the Twobreakfasts cabinet resigned, as the trails of corruption were soon traced to the highest levels of the administration. Then, as you’ll probably recall, Romulo went into hiding and police did a Where’s Waldo? all over Peru until giving himself up a full 30 days later.

You’ve already guessed what I’m going to say, haven’t you? Yup, the dude has been let out of jail. Peru’s Poder Justicial (PJ) (‘Justicial Power’…the law people) have offically let him do his arrest thing in the comfort of his own home, but as Juan Sheput points out, house arrest in Peru is simply the first step in quietly dropping any case of this type, especially for an APRA buddy during the time of an APRA government. And if all this isn’t enough, check out one of the reasons the PJ said he’s good to do his arrest on his sofa (Sheput dixit)

One of the considerations of the PJ fr the freeing (because house arrest with this government is being freed) of Rómulo León was that this individual has already been tried for corruption and demonstrated good personal conduct.

Wilkommen, Mondo Bizarro. Yes you read that right, in Peru it’s considered a positive that because a dude has been tried for corruption previously and while the trial went on didn’t try to skip the country or kill anybody or whatever. It’s good reason to let him out.

Meanwhile, this week’s ‘No Shit Sherlock’ award is won by outgoing (he’s gone next week) Prime Minister Yehude Simon, who says that freeing Romulo today was “a bad signal for the country.” Second prize in the NSS award goes to opposition congressman Isaac Meckler who said that a link seems to exist between the Courts and the APRA party. Ah wuz shocked, ah tellz ya….shocked ah wuz.

Hey, maybe…..just maybe, that link is something we’ve already mentioned here at IKN. It just so happens that Romulo Leon has a daughter who’s a congress member for the APRA party in the current parliament. Luciana León also knew all about the ‘petroaudios’ corruption case because she was found with a whle bunch of e-mails from her father about it all. But León is also the protegé(e) of Mercedes Cabanillas, who is ….roll on the drums…the present Minister of the Interior (!) and as we mentioned before was closely involved with the (ahem) modernization of PeruPetro in the Twobreakfasts administration before getting a ministrial position.