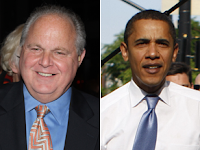 The events of last weekend were monumental in significance for the Obama presidency and for the ever-rising credibility of the sane and right-thinking right wing, so we should take a closer look at what happened:
Conclusion: If all this sounds weird and confusing, dear IKN Reader, just swap the name Barack for Hugo, Rush for Mario, Washington for Caracas and that’s exactly what went on last week. Mario Vargas Llosa is a dickhead. The end.