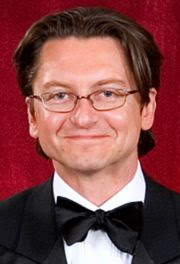 Andre Agapov and a serious bow-tie
Yeah, a whole range of fave raves in the title line, and all because of this little report out of (the rapidly improving) Bloomie Venezuela. They even get to name a decent source of information for once. I may have missed on the Ecuador story (and I’ll write a longer post on that tomorrow), but this one is coming to pass as seen.
This is off the wires, so no link as yet (but it’s kosher). Once the story makes it to the open internet I’ll add.

By Steven Bodzin
Dec. 12 (Bloomberg) — Two Venezuelan mines containing about $25 billion worth of gold most likely will be developed as a single project, according to Andre Agapov, chief executive officer of Rusoro Mining Ltd.

The projects, known as Las Cristinas and Brisas and controlled by Crystallex International Corp. and Gold Reserve Inc., are “one ore body, and it would be naive to think it would be more than one company” involved in development, Agapov said in a telephone interview from London. He suggested a Russian miner would get the job.

The mines have been in limbo since both Toronto-based Crystallex and Gold Reserve of Spokane, Washington, failed toget needed environmental permits in April. On Nov. 14, Agapov said that Rusoro was Venezuela’s “preferred partner” to develop the site. Agapov considers his Vancouver-based company Russian because he and the other founders are Russian.

“Only a Russian mining company can afford” to remedy problems at the site, Agapov said today. “Which company, I don’t know, but it’s the only way it’s going to be resolved,” he said. “I see resolution in the first half of 2009.”

Venezuela’s Mining and Basic Industries Minister Rodolfo Sanz said Nov. 5 that the country would take over the mines and administer them.

Rusoro, which has taken part in Russian diplomatic} missions to Venezuela, already operates the country’s Choco10 mine.

At Las Cristinas and Brisas, “it would be naive to believe it will be two ownerships, two permits. That will never work” for Venezuela’s mining and environment ministries, Agapov said today.

Together, the two mines contain more than 31 million ounces of proven and probable reserves, valued at more than $25 billion at today’s price.

Agapov declined to comment on a report on mining blog Inca Kola News that his company may try to take over Gold Reserve after being rebuffed in September. “They’re perfectly positioned for some transaction,” he said. “I don’t know if it will happen or not. It’s the end of the year. Maybe some brave ones will step in.”

Gold Reserve President Douglas Belanger said he knew nothing about any attempt to take over his company and said today’s 30 percent surge in the share price was most likely the result of rising gold prices and the stock being worth half the company’s breakup value.

“There are no bids, not that we’re aware of,” he said. “We wouldn’t comment anyway.”

Gold Reserve rose 9 cents to 39 cents. It has plunged 92 percent in the past year.

Belanger said he recently converted non-trading Class B shares into sellable Class A shares because the stock’s value had dropped enough that he could trade out of the Class B stock without tax liability.

“It was just simple accounting, a chance to clean something up that had been around for years,” he said in a phone interview. “If I had converted them at $10, I would have had about $9.70 taxable income. I just took advantage of the low price.”

He also said the company’s debt remains outstanding and hasn’t been bought back. Crystallex spokesman Richard Marshall didn’t immediately return a call seeking comment. The stock declined 1 cent, or 7.1 percent, to 13 cents in New York. It has fallen 94 percent in the past year.

Related Post
Why Gold Reserve (GRZ) may about about to sell out to Rusoro (RML.v)