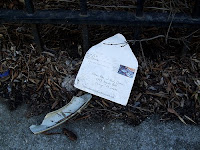 So back on November 18th I received a mail concerning this post covering Sandspring Resources (SSP.v) from its main shareholder John Adams, who kindly confirmed his identity (as seen in the post+update+comment on that link). In his polite and educated mail, he offered to answer any questions I might have about the project. That was kind of him, so I sent him a short mail with three or four questions. Here’s an extract of my words to him;

“…..thanks due for the offer of finding out more about Toroparu. I suppose the first thing I’d want to know are the chances of the resource growing significantly from the 43-101 number already published. What kind of blue sky does the asset offer? And as for …”

So I’ve given it a full week but still no response from Adams on those. He’s either a busy man and just hasn’t had time to respond, or he did in fact write an answer but from some interwebnetpìpes snafu or other it didn’t arive in my mailbox. I can’t think of any other reason why the response hasn’t arrived yet