According to the mailbox, your humble scribe wasn’t the only person scratching his noggin over the rather odd NR out of Seafield Resources (SFF.v) this morning. For one thing it’s the first news out of the company for three months, a gap of silence which compares to its hi-freq bullshit peak when hailed in late 2010 by that supreme market bullshitter James West as “the next Ventana Gold”… 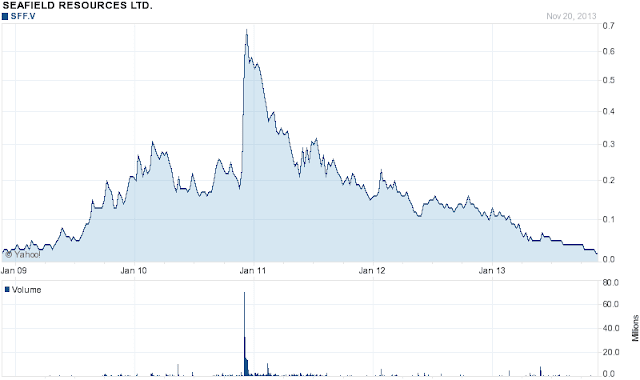 …and pumped to an inch of a jailhouse before the insider left the sheep holding a massive bag (hey that worked out well). For another the strategic alternatives included a most bizarre technical update…

During the recently completed “Confirmatory Metallurgical Test Work
Program” for the feasibility study for the Miraflores Project, it became
evident that the measured gold grades within the chosen samples were
generally well under the targeted grades. After further investigation,
it appears that some of the gold was being lost during the core cutting
and drilling processes. During the previous campaigns, the standard
procedures in place were insufficient to capture the respective slurries
and test them to ascertain the component of gold contained within these
slurries. The key areas for further study are the high grade vein zones
whereby the gold is generally associated with argillized material as
well as in the more porous areas of the breccia. Seafield believes that
it is important to design a program targeting these inefficiencies and
review the measured gold grades in an attempt to capture the true grades
of the deposit, which may have a positive impact on the resource
estimate at Miraflores. As a result, the Company has decided to design a
work program to analyse the potential impact on the project and to
delay the completion of the Feasibility Study until this issue has been
fully evaluated.

… which twisted and turned around one main point: the gold grades it’s announced so far are a crock of shit. They try to spin it as a potential advantage, too (worth a grin all by itself). You’ll also note that they’ve delayed the Feas Study for  totally logical reason, right?
Well, come 1:30pm the mystery cleared up more than a little as it just so turns out, all coincidence like, that SFF filed its quarter. Which included this:

This of course has nothing to do with the fact that they’ve delayed passage of the feas. Or anything to do with the 2c and 3c share price these days. Or anything to do with the piece of shit asset that these jokers are still trying to pass off as a valuable property. SFF is a prime example of the type of exploreco that needs to die before the sector can make something of a true recovery. And it’s run by the type of management that needs to be barred forever from ever ripping off the investment public with their sophistry and soft soap. The sooner these wastes of space disappear, the better.